Update Required To play the media you will need to either update your browser to a recent version or update your Flash plugin.
By Susan Shand
25 September, 2019


New York's Metropolitan Opera announced Tuesday that Plácido Domingo had agreed to cancel plans to perform at the opera house.

Domingo has been accused by several women of sexual harassment. The opera star said he will never again perform with the Metropolitan Opera, also called "the Met."

Domingo was supposed to sing in Giuseppe Verdi's "Macbeth" Wednesday night. The show is the Met's first of the new season. It would have been Domingo's first performance in the United States since the accusations were made. 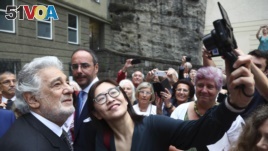 Placido Domingo poses for selfies at the 'Festspielhaus' opera house after he performed 'Luisa Miller' by Giuseppe Verdi in Salzburg, Austria, Sunday, Aug. 25, 2019.

The Associated Press (AP) reports that several women have accused him of inappropriate behavior. One performer said he grabbed her breast.

The Met was under growing pressure to cancel Domingo's appearances. Its general manager, Peter Gelb, said on Saturday that the opera house was awaiting results of investigations by the LA Opera. Domingo has served as general director of the LA Opera since 2003.

The American Guild of Musical Artists, the labor union that represents opera company workers, was also investigating the claims.

In a statement, Plácido Domingo said that he would not again sing at the Met after what the company said was more than 700 performances. Domingo noted that he started performing "at the Metropolitan Opera at the age of 27."

He denied all the accusations and said that he had requested his removal from the performance.

The Met also released a statement, which said that the Spanish opera star "agreed" to end his performances at the Met.

But in Europe, reaction to the harassment claims has been far different. Opera lovers praised his performance of Verdi's "Luisa Miller" at the Salzburg Festival last month, just a few weeks after the first AP story.

Angela Turner Wilson is the singer who gave the AP permission to use her name in the story about Domingo grabbing a woman's breast. Wilson said she was "relieved" by the Met's action. She criticized Gelb for saying earlier that the opera house could not act without additional evidence because all of Domingo's accusers refused to be identified.

Wilson said Gelb's statements were "a major concern to me and many others who wish to see...sexual harassment and retaliation removed from our industry. It is time."

Another of Domingo's accusers, Patricia Wulf, also called the decision a relief. The Met finally stepped up and did the right thing," she told the AP.

Wulf accused Domingo of repeatedly harassing her during performances at Washington Opera in the late 1990s. At the time, he was the general director of the opera company.

The Met dismissed conductor James Levine in 2018 after an investigation found evidence of sexual abuse and harassment. Levine was the company's music director for many years. He denied the accusations. He and the Met reached a settlement last month.

Domingo is known around the world for his performances as part of The Three Tenors with Luciano Pavarotti and José Carreras.

Domingo's next performance is in Verdi's "Nabucco" at the Zurich Opera on October 13. His next U.S. performance will be at the LA Opera in February.

Zeljko Lucic will replace Domingo and sing all six performance of "Macbeth" at the Met.

Outside the opera house Tuesday night, Cathy Soderquist said the Met's decision was too strong. The retired government worker had planned to see Macbeth on Wednesday.

"He's [been] accused, but he hasn't been prosecuted. He hasn't gone to court," she said.

Dick Soderquist, her husband, said "Europeans are...laughing at us."

sexual harassment – n. behavior such as making unwelcome, unwanted sexual comments or physical advances in a workplace or other professional environment

grab – v. to quickly take and hold (someone or something) with your hand or arms

manager – n. someone who is in charge of a business, department, etc.

relieve– adj. feeling relaxed and happy because something difficult or unpleasant has been stopped, avoided, or made easier

retaliation – n. the action to do something bad to someone who has hurt you or treated you badly

prosecute – v. to hold a trial against a person who is accused of a crime to see if that person is guilty