Update Required To play the media you will need to either update your browser to a recent version or update your Flash plugin.
By John Russell
01 May 2021 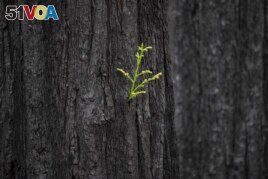 The 7,284-hectare park usually has about 1 million visitors a year. But last year, many parts of the park burned for 24 hours. More than 100 structures were destroyed, including the historic park headquarters, shelters, picnic tables and more. Many bridges are gone too. In some places, root balls are still smoking, leaving dangerous underground areas, Kerbavaz said.

Since last August, damage experts have been trying to identify materials and waste that need to be removed. In many ways, the park does not look much different than it did soon after the fire.

An Associated Press reporter and photographer walked on the Redwood Trail a week after the fire. They confirmed that most of the ancient redwoods had survived. The trees are about 2,000 years old and among the tallest living things on Earth.

The next eight to 10 months will be spent cleaning up the park. It will be up to a year before the public can safely use trails beyond a small coastal area, State Parks District Superintendent Chris Spohrer said.

But no one should expect an exact rebuilding of what was lost, he noted.

"We need to be setting expectations for the public that when they come back, it will not look the same," Spohrer said.

"I'd hate to ever suggest we think that a fire is a good thing, but there is no question it wiped the slate clean — and that's something you just don't see in any other existing park," said Sara Barth.

Barth is executive director of Sempervirens Fund. That group started an effort in 1900 to protect 15.5 square kilometers of redwood forest that is now in the center of Big Basin.

"When Big Basin was established, it was a beacon for the state parks system," she said. Beacon is a term that means a thing that gives hope to others.

Barth added, "In this fire and rebirth, you have an opportunity again." Redwoods are naturally fire resistant. In old-growth forests, most trees have burn marks dating back hundreds of years. Sam Hodder is president of Save the Redwoods League, a non-profit environmental group. Hodder used the term resilience – the ability to become strong and healthy again – to describe the healing process.

"The trees themselves will tell about resilience and recovery and the broader California landscape," he said.

wipe the slate clean – expression : to forget all the things that have happened or been done and start doing something again : to start again from the very beginning