Update Required To play the media you will need to either update your browser to a recent version or update your Flash plugin.
By Dan Friedell
10 July, 2016


African countries may be best-known for their track and field success at the Olympics. But interest in Asian martial arts has grown on the continent.

African nations are sending 50 athletes to Rio de Janeiro, Brazil to compete in events such as taekwondo and judo. 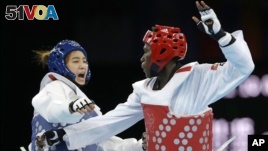 Ivory Coast's Ruth Gbagbi, in red, competes at the 2012 London Olympics. She will be back competing for her country in Brazil this August.

A Korean Taekwondo expert introduced the exercise to Ivory Coast in the 1960s. It is now a popular after-school activity for children.

Ivorian Taekwondo competitor Ruth Gbagbi will be making her second Olympics appearance. She also competed in the 2012 London Games but lost both her matches. She is 22 and competes in the 67-kilogram division.

Mamina Koné and Cheick Cissé are the other two Ivorian taekwondo competitors at this year's games. It will be their first Olympic experience.

Taekwondo became an Olympic sport in 2000. Only three Africans have won medals in the event.

Ivory Coast has one medal in its Olympic history. Ivorian runner Gabriel Tiacoh took home a silver medal in 1984 for his second place finish in the men's 400-meter event.

All three of the taekwondo athletes from Ivory Coast won medals in recent African competitions. The director of the Ivory Coast team says the three athletes are on the same level as the best in the world.

The competitors say they are setting an example for the next generation of Ivorian athletes.

Moussa Berthé is 13. He has been doing taekwondo for five years.

He says he learned "discipline, respect, dignity and wisdom" from his teachers.

Berthé will be watching the national team compete in Rio.

"They are examples to follow because they are champions, and they come from Ivory Coast so it encourages us to continue taekwondo," he said.

The taekwondo competition begins in Rio on August 17.

Emilie Iob wrote this story for VOANews. Dan Friedell adapted it for Learning English. Caty Weaver was the editor.

How do you think the African athletes will do at the Olympics? We want to know. Write to us in the Comments Section or on 51VOA.COM.

martial arts – n. any one of several forms of fighting and self-defense (such as karate and judo) that are widely practiced as sports

wisdom – n. knowledge that is gained by having many experiences in life

discipline – n. a way of behaving that shows a willingness to obey rules or orders

dignity – n. a way of appearing or behaving that suggests seriousness and self-control

division – n. a group of teams or athletes in a section of a competition

match – n. a contest between two athletes or teams