Update Required To play the media you will need to either update your browser to a recent version or update your Flash plugin.
By Bryan Lynn
15 April 2021


A top ruling party official in Japan said Thursday it is still possible that the Tokyo Olympics could be canceled.

The comment came from Toshihiro Nikai, secretary general of the ruling Liberal Democratic Party. He spoke to broadcaster TBS as COVID-19 cases have been rising across Japan.

"If it seems impossible to go on with the games, they must be definitely canceled," Nikai said. "If there is a surge in infections because of the Olympics, there will be no meaning to having the Olympics."

However, Nikai added that he felt it was important for Japan to keep working to put on a successful Olympic Games. "It is a big opportunity. I want to make it a success," he said. "We will have many issues to resolve and prepare, and it is important to take care of them one by one."

Prime Minister Yoshihide Suga said in a statement there was "no change to the government position to do everything to achieve a safe and secure Olympics." 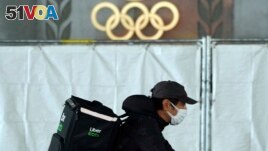 An Uber Eats delivery person carries items near the Japan National Stadium, where opening ceremony and other events are planned for postponed Tokyo 2020 Olympics, on Tuesday, April 6, 2021, in Tokyo. (AP Photo/Eugene Hoshiko)

Tokyo organizers said they -- together with officials from the International Olympic Committee (IOC) -- "are fully focused on hosting the games this summer."

The recent rise in COVID-19 cases included 729 new cases in Tokyo on Thursday, the most since early February. Tokyo Governor Yuriko Koike urged people in the city to take extra protections and asked people from outside Tokyo not to visit.

Some experts have warned that a new COVID-19 version, or variant, might replace the current virus and cause an explosion of infections by early May.

Another Japanese official told a local television station that if the Tokyo Olympics do go forward, the events may be held with no fans. "I think the question is how to do the Olympics in a way that is possible in this situation," said Taro Kono. He is the government minister in charge of Japan's vaccination efforts. "That may mean there will probably be no spectators."

The delayed Tokyo Olympics are set to open on July 23, with the Paralympics to follow on August 24. Fans from outside Japan have already been banned. Now even Japanese attendees could be kept away.

Tokyo organizers have said they expect to announce a decision this month on the number of fans permitted at each event.

The Associated Press and Reuters reported on this story. Bryan Lynn adapted the reports for Learning English. Hai Do was the editor.

definite – adj. for sure, fixed, not likely to change

surge – n. a fast increase in something

opportunity – n. a situation in which it is possible for someone to do something

achieve – v. to succeed in doing something

focus – v. give special attention to something

spectator – n. someone who watches an event, sport, etc.