Update Required To play the media you will need to either update your browser to a recent version or update your Flash plugin.
By John Russell
10 April 2022


Researchers in Japan have developed a robot capable of peeling a banana without crushing the fruit inside.

While the two-armed machine is only successful 57 percent of the time, banana peeling points to a future where machines could do more sensitive, skillful kinds of work.

Video from researchers at the University of Tokyo showed the robot pick up and peel a banana with both hands in about three minutes. 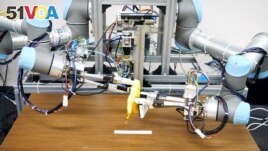 A dual-armed robot picks up a banana and peels it. Image taken December 2, 2021 and released by ISI (Kuniyoshi) Lab., School of Info. Sci & Tech., The University of Tokyo, Japan. (Handout via REUTERS)

Researchers Heecheol Kim, Yoshiyuki Ohmura and Yasuo Kuniyoshi trained the robot using a "deep imitation learning" process. In this training, they showed the banana-peeling action hundreds of times to the robot to produce enough data for the robot to learn the actions and copy them.

In this case, the banana reached its success rate after more than 13 hours of training.

While the experiment requires more testing, Kuniyoshi believes his method can teach robots to do different simple "human" tasks.

He hopes the better-trained robots can help with Japan's labor shortage problems, particularly in food-processing factories that currently depend on human workers.

Rikako Maruyama and Akiko Okamoto reported on this story for Reuters. John Russell adapted it for Learning English.

peel – v. to pull or strip off an outer layer of

imitation – n. an act or instance of imitating - following as a pattern, model, or example

task -- n. a piece of work that has been given to someone : a job for someone to do