Update Required To play the media you will need to either update your browser to a recent version or update your Flash plugin.
By VOA
18 December 2020


Our story this week is "Keesh." It was written by Jack London. Here is Shep O'Neal to tell you the story.

Keesh lived at the edge of the polar sea. He had seen thirteen suns in the Eskimo way of keeping time. Among the Eskimos, the sun each winter leaves the land in darkness. And the next year, a new sun returns, so it might be warm again.

The father of Keesh had been a brave man. But he had died hunting for food. Keesh was his only son. Keesh lived along with his mother, Ikeega.

One night, the village council met in the big igloo of Klosh-kwan, the chief. Keesh was there with the others. He listened, then waited for silence.

He said, "It is true that you give us some meat. But it is often old and tough meat, and has many bones."

The hunters were surprised. This was a child speaking against them. A child talking like a grown man!

Keesh said, "My father, Bok, was a great hunter. It is said that Bok brought home more meat than any of the two best hunters. And that he divided the meat so that all got an equal share."

"Naah! Naah!" the hunters cried. "Put the child out! Send him to bed. He should not talk to gray-beards this way!"

Keesh waited until the noise stopped. "You have a wife, Ugh-gluk," he said. "And you speak for her. My mother has no one but me. So I speak. As I say, Bok hunted greatly, but is now dead. It is only fair then that my mother, who was his wife, and I, his son, should have meat when the tribe has meat. I, Keesh, son of Bok, have spoken."

Again, there was a great noise in the igloo. The council ordered Keesh to bed. It even talked of giving him no food.

Keesh jumped to his feet. "Hear me!" he cried. "Never shall I speak in the council igloo again. I shall go hunt meat like my father, Bok."

There was much laughter when Keesh spoke of hunting. The laughter followed Keesh as he left the council meeting.

The next day, Keesh started out for the shore, where the land meets the ice. Those who watched saw that he carried his bow and many arrows. Across his shoulder was his father's big hunting spear. Again there was laughter.

One day passed, then a second. On the third day, a great wind blew. There was no sign of Keesh. His mother, Ikeega, put burned seal oil on her face to show her sorrow. The women shouted at their men for letting the little boy go. The men made no answer, but got ready to search for the body of Keesh.

Early next morning, Keesh walked into the village. Across his shoulders was fresh meat. "Go you men, with dogs and sleds. Follow my footsteps. Travel for a day," he said. "There is much meat on the ice. A she-bear and her two cubs."

His mother was very happy. Keesh, trying to be a man, said to her, "Come, Ikeega, let us eat. And after that, I shall sleep. For I am tired."

There was much talk after Keesh went to his igloo. The killing of a bear was dangerous. But it was three times more dangerous to kill a mother bear with cubs. The men did not believe Keesh had done so. But the women pointed to the fresh meat. At last, the men agreed to go for the meat that was left. But they were not very happy.

So began the mystery of Keesh.

On his next trip, he killed a young bear...and on the following trip, a large male bear and its mate.

Then there was talk of magic and witchcraft in the village. "He hunts with evil spirits," said one. "Maybe his father's spirit hunts with him," said another.

Keesh continued to bring meat to the village. Some people thought he was a great hunter. There was talk of making him chief, after old Klosh-kwan. They waited, hoping he would come to council meetings. But he never came. 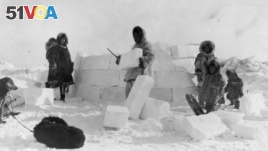 "I would like to build an igloo." Keesh said one day, "but I have no time. My job is hunting. So it would be just if the men and women of the village who eat my meat, build my igloo." And the igloo was built. It was even bigger than the igloo of the Chief Klosh-kwan.

One day, Ugh-gluk talked to Keesh. "It is said that you hunt with evil spirits, and they help you kill the bear."

"Is not the meat good?" Keesh answered. "Has anyone in the village yet become sick after eating it? How do you know evil spirits are with me? Or do you say it because I am a good hunter?"

The council sat up late talking about Keesh and the meat. They decided to spy on him.

On Keesh's next trip, two young hunters, Bim and Bawn, followed him. After five days, they returned. The council met to hear their story.

"Brothers," Bim said, "we followed Keesh, and he did not see us. The first day he came to a great bear. Keesh shouted at the bear, loudly. The bear saw him and became angry. It rose high on its legs and growled. But Keesh walked up to it."

"We saw it," Bawn, the other hunter, said. "The bear began to run toward Keesh. Keesh ran away. But as he ran, he dropped a little round ball on the ice. The bear stopped and smelled the ball, then ate it. Keesh continued to run, dropping more balls on the ice. The bear followed and ate the balls."

The council members listened to every word. Bim continued the story. "The bear suddenly stood up straight and began to shout in pain."

I do not know," said Bawn. "I can tell only what my eyes saw. The bear grew weak. Then it sat down and pulled at its own fur with its sharp claws. Keesh watched the bear that whole day. For three more days, Keesh continued to watch the bear. It was getting weaker and weaker. Keesh moved carefully up to the bear and pushed his father's spear into it."

That afternoon, the council talked and talked. When Keesh arrived in the village, the council sent a messenger to ask him to come to the meeting. But Keesh said he was tired and hungry. He said his igloo was big and could hold many people, if the council wanted a meeting.

Klosh-kwan led the council to the igloo of Keesh. Keesh was eating, but he welcomed them. Klosh-kwan told Keesh that two hunters had seen him kill a bear. And then, in a serious voice to Keesh, he said, "We want to know how you did it." Did you use magic and witchcraft?"

Keesh looked up and smiled. "No, Klosh-kwan. I am a boy. I know nothing of magic or witchcraft. But I have found an easy way to kill the ice-bear. It is head-craft, not witchcraft."

"And will you tell us, O Keesh?" Klosh-kwan asked in a shaking voice.

"I will tell you. It is very simple. Watch."

Keesh picked up a thin piece of whalebone. The ends were pointed and sharp as a knife. Keesh bent the bone into a circle. Suddenly he let the bone go, and it became straight with a sharp snap. He picked up a piece of seal meat.

"So," he said, "first make a circle with a sharp, thin piece of whalebone. Put the circle of bone inside some seal meat. Put it in the snow to freeze. The bear eats the ball of meat with the circle of bone inside. When the meat gets inside the bear, the meat gets warm, and the bone goes snap! The sharp points make the bear sick. It is easy to kill then. It is simple."

Ugh-gluk said, "Ohhh!" Klosh-kwan said "Ahh!" Each said something in his own way. And all understood.

That is the story of Keesh, who lived long ago on the edge of the polar sea. Because he used head-craft, instead of witchcraft, he rose from the poorest igloo to be the chief in the village. And for all the years that followed, his people were happy. No one cried at night with pains of hunger.

You have just heard the story, "Keesh." It was written by Jack London. Your storyteller was Shep O'Neal. This is Shirley Griffith.

Eskimo - n. a member of a group of peoples of northern Canada, Greenland, Alaska, and eastern Siberia

igloo - n. a house made of blocks of snow or ice in the form of a dome

witchcraft - n. magical things that are done by witches; the use of magical powers obtained especially from evil spirits

whalebone - n. a hard substance that is found in the jaw of some types of whales