Man Hopes to Define Every English Word with a Limerick

Update Required To play the media you will need to either update your browser to a recent version or update your Flash plugin.
By Bryan Lynn
06 March, 2018


There are many different methods for studying languages and learning new words.

One man has come up with his own unusual way to define the meanings of words - through rhyming. He uses words that end with the same sound or a similar sound.

Chris Strolin, an American from Belleville, Illinois, is working on an English language reference guide completely made up of limericks. A limerick is a humorous five-line poem with an orderly structure of rhymes. 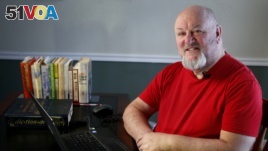 Strolin says the idea for his dictionary started out as a joke when he suggested it to some of his language-loving friends. His joke centered on the Oxford English Dictionary, a highly-respected publication produced in Britain. It defines 600,000 words. Strolin told his friends that while the Oxford dictionary was good, it could be improved. His not-so-serious suggestion was to use limericks.

In 2004, he decided to launch his own limerick dictionary online. He called it, The Omnificent English Dictionary in Limerick Form.

"It is a international dictionary-writing project in which our goal is to write at least one original limerick for every single definition of every single word in the English language."

Strolin started out with a limerick definition of the word "a." It simply began with the words, "The very first word here is a..." From there, he just kept going and has not stopped since.

"The limerick is probably the most reader friendly of all types of poetry," he told the Associated Press. "It's also one of the easiest forms of poetry to write."

Strolin, a retired Air Force radio operator, explains that the best limericks in his dictionary "will clearly define their words in a humorous or interesting way." But he admits some limericks are meant more for fun than to provide the best possible definitions.

Since the project is massive, Strolin invited others to come up with and add their own limericks to the dictionary. The reaction to his appeal was huge. About 1,000 people have contributed examples for the effort. To date, more than 97,000 rhyming definitions have been created, with the number expected to reach 100,000 this year.

One of the most active contributors is Andrew Besso of Jericho, Vermont. He began creating limerick definitions in late 2015.

"I've been writing a limerick a day, or sometimes two, for a while now," Besso said. "Usually the way I decide what to write is by choosing from lists of words that haven't been defined yet. I won't tackle a word that's already been defined unless I've got something to add."

"An armed robber came into our shop,

And he brandished a knife at my pop.

He demanded some cash,

Told us not to be rash,

Then got Tased by an off-duty cop."

Another limerick writer is Rory Ewins, who reads his definition for "CCTV."

"What's to fear from a camera or three

And appearing on CCTV?

Having every move tracked

Is a comfort, in fact.

In addition to his publishing duties, Strolin says, he also tries to write at least one limerick each day. But he thinks some of the best definitions come from people all over the world.

Here he reads one of his favorite limericks for the word "adult," created by writer Bill Middleton.

As a teen, I would dash about town.

Now adult, I shall go

Goes to prove: what grows up must calm down."

To simplify the collection and publishing process, Strolin decided to keep adding new limericks in alphabetical order. Currently, the dictionary stops after the letter G.

Strolin says he believes the unusual dictionary - once completed - will be used by language lovers for years to come.

"There's no doubt in my mind people are going to be reading and enjoying our limericks 200 to 300 years from now," he said.

The dictionary itself will be growing for many years to come. Strolin estimates his project will not be fully completed until 2076 – long after he is gone. He said he hopes his grandchildren, or maybe their children, will want to take over the project and finish it.

Bryan Lynn wrote this story for VOA Learning English, based on a report from the Associated Press and other sources. George Grow was the editor.

If you like limericks and have an idea for your own, we would love to see it here. Please share it with us! You can also visit 51VOA.COM.

original – adj. special and interesting because of not being the same as others

contribute – v. to donate or provide something

brandish – v. to wave something in the air, especially a weapon

rash – adj. done or made quickly and without thought about what will happen as a result

tase – v. to shoot with a Taser gun

dash – v. to run or move quickly or suddenly

doubt – n. a feeling of not knowing what to believe or what to do