Math Expert: All COVID Virus in the World Would Fit in a Soda Can

Update Required To play the media you will need to either update your browser to a recent version or update your Flash plugin.
By Jonathan Evans
14 February 2021


A British math expert says all the COVID-causing virus that currently exists in the world could easily fit inside a single can of soda. The finding shows just how much damage can be caused by very small virus particles.

Christian Yates of the University of Bath studied worldwide rates of new COVID-19 infections and made estimates of the amount of virus in an infected person's blood. He found that there are about two quintillion - or two billion billion - SARS-CoV-2 virus particles in the world at any one time.

Yates said he came up with that result by measuring the distance across one virus particle - about 100 nanometers, or 100 billionths of a meter. He then found the total amount of space the virus takes up. 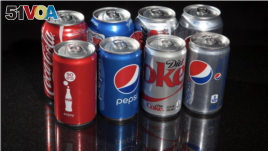 FILE PHOTO: Regular and mini cans of Coke and Pepsi are pictured in this photo illustration in New York, August 5, 2014. REUTERS/Carlo Allegro/File Photo

He said the total is still less than can be contained in a single 330 milliliter soda can. He noted that total includes the fact that the particles will leave a lot of space in between when placed together.

"It's astonishing to think that all the trouble, the disruption, the hardship and the loss of life that has resulted over the last year could constitute just a few mouthfuls," Yates said in a report on his findings.

More than 2.3 million people have died in the COVID-19 pandemic so far. There have been about 107 million confirmed cases worldwide.

Jonathan Evans adapted this story for Learning English based on a Reuters news service article. Bryan Lynn was the editor.

constitute – v. to make up or form something

disruption – n. the act or process of breaking apart or rupturing