Mixed Signals at US Border with Mexico

Update Required To play the media you will need to either update your browser to a recent version or update your Flash plugin.
By VOA
06 September, 2014


Since last October, tens of thousands of children have entered the United States without a parent or legal guardian. This was two times the number as the year before.

Pastor Davila's humanitarian relief group helps the Central Americans. The immigrants say more people are now traveling to the United States from Guatemala, El Salvador and Honduras. These people will soon arrive at the U.S. border.

At a shelter, the migrants tell Pastor Davila they know other people who are traveling to the border. They also hope their families will be able to join them as soon as possible. The clergyman believes this is true because he hears this information so often.

The number of Central Americans arrested at the U.S. border reached an all-time high in June. Border Patrol guards arrested many adults and children. They were released because there was no room to detain them. Others surrendered and were taken to an immigration court. They were then released, but told to return at a later date.

In McAllen, Texas, Sister Norma Pimentel has been busy for months dealing with the Central American immigrants. She operates a center for Catholic Charities of the Rio Grande Valley. Recently, the center helped 70 immigrants in one day.

But Sister Pimentel said she has not heard that more immigrants are on their way. 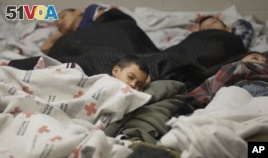 In this June 18, 2014, file photo, detainees sleep in a holding cell at a U.S. Customs and Border Protection, processing facility in Brownsville,Texas.

"They don't know when people are coming and we don't know either, you know. It could very well be that in October or later on we might have great numbers of people. I think Border Patrol expects numbers to increase in the near future, but we have no clue as to what's going to happen."

Shelter and immigrant aid workers think about the things that cause people to cross the border at certain times of the year. Some possible reasons are weather conditions, school schedules, and criminal activity. However, none of them expected the increase in immigrants this year.

Sara Melendez works with U.S. Customs and Border Patrol in Laredo, Texas. She said her office has not heard about another increase in immigrants.

This story is based on reporting from VOA's Victoria Macchi and narrated by Anne Ball.