US Citizens Fighting and Dying for Jihadist Groups

Update Required To play the media you will need to either update your browser to a recent version or update your Flash plugin.
By VOA
03 September, 2014


That recording is from a jihadist video available on the Internet. The video reportedly shows U.S. citizen Moner Mohammad abu-Salha. It is part of a propaganda campaign aimed at getting more Americans to join the fight.

“I have one word to say to you kafir (unbeliever): we are coming for you…”

Moner Mohammad abu-Salha was unlike the U.S. citizens who fought with the Islamic State and recently died in Syria. He fought for another jihadist group, the al-Nusra Front.

Daveed Gartenstein-Ross is with the Foundation for Defense of Democracies policy group. 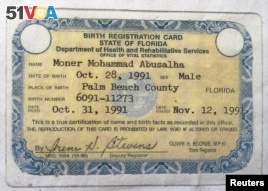 Florida birth registration card for Moner Mohammad Abu-Salha is seen in this government handout image. The U.S. State Department on May 30, 2014 confirmed that an American citizen, Moner Mohammad, had carried out a suicide bombing in Syria.

“He was actually able to return to the United States after having been in Syria…and then go back to Syria, where he died as a suicide bomber, which indicates that he evaded intelligence.”

Mr. Gartenstein-Ross says the United States has generally done a good job of making sure that foreign fighters do not return home to launch terror attacks. But he says the fact that one American was able to avoid discovery shows the dangers.

Of all the jihadist groups, U.S. officials and experts say the Islamic State is the most likely to be plotting such attacks.

Jonah Blank works for the RAND Corporation. He says the death in battle of American Douglas McCain shows the IS may not be preparing its Western fighters for attacks in their home countries.

“If that were its main goal, it wouldn’t have let him get anywhere near a bullet.”

Jonah Blank also says the way the Islamic State publicizes its successes on social media could harm any plot to export its terror.

“It does also present the FBI (Federal Bureau of Investigation), Homeland Security and other security institutions, organizations with a really valuable way with keeping tabs on these individuals.”

Either way, the United States “is not turning a blind eye” to the Islamic State and its stated goals. Rear Admiral John Kirby is a Defense Department spokesman.

Officials say as many as 100 Americans are thought to have traveled to Iraq and Syria to help groups like the Islamic State. Adding Europeans, the number grows to 1,000 or more.

present – v. to offer for consideration