Vietnam, We Have a Nutrition Problem

Update Required To play the media you will need to either update your browser to a recent version or update your Flash plugin.
By Lien Hoang
30 August, 2014


Vietnam has a nutrition problem: too many of its children are underweight. Yet more and more Vietnamese boys and girls are becoming overweight.

The two conditions may appear to be separate, but they are linked. They are both the result of poor diets.

Vietnam has a history of food insecurity. So many Vietnamese eat more than they should because they are fearful of food shortages. And they remember when there were food shortages in the past. 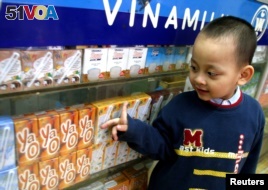 A Vietnamese boy looks at dairy products at a showroom of the Vietnam Dairy Products Co (Vinamilk) in Hanoi.

People in other countries do the same thing. Like Vietnam, these nations have experienced food insecurity. But many of them now have a rising availability of meat, milk, other food products, including "fast food."

Today, fewer Vietnamese are going hungry. Some experts have praised Vietnam as an example of the success of the United Nations' Millennium Development Goals. The first of the eight goals was to end extreme poverty and hunger.

The UN's website says the food poverty rate in Vietnam was reduced by more than two-thirds from 1993 to 2008.

But many Vietnamese alive today can remember when people died of hunger in their country.

Le Thi My Phuong has two children. She was born in 1976. She was not alive during the war between Vietnam and the United States. But the war affected her. Partly as a result of the conflict, Vietnam experienced crop failures into the 1980s. The government rationed, or restricted, food during the period. Many Vietnamese remember that time. And they want to make sure their children always have enough to eat.

My Phuong likes to give her children a cocoa product. It combines chocolate powder and milk.

In Vietnam and other developing countries, having overweight children is seen as a sign of wealth. It shows that parents can feed their children well.

McDonald's restaurants opened in Vietnam in February. Carbonated soft drinks with high amounts of sugar, called sodas, do not cost much. In July, the soda companies were able to persuade Vietnam not to tax such drinks.

The UN Children's Fund says fast food, sugary drinks and lack of interest in exercise have caused the rate of overweight children in Vietnam to increase by six times since 2000.

But another reason might be milk. Drinking milk was once rare in Vietnam. That is because many Vietnamese experienced health problems after drinking it. But the years of starvation and reduced growth of children caused officials to look for ways to solve the country's nutrition problems. Officials believed milk could help because it is a simple source of nutrients. So they began a campaign to urge people to drink milk.

Vinamilk is one of the most-powerful companies in the country. It is partly-owned by the Vietnamese government. It and other dairy companies made television advertisements that showed smiling children who drank milk grew tall and fat.

The campaign worked. Vietnamese now believe it is important for children to drink milk in addition to eating more-traditional foods like rice and noodles. People were happy that milk had vitamin D and calcium. But they did not talk about other things that milk had, such as hormones, antibiotics, allergens, fat and sugar. And it had lactose, which causes problems for some people.

Roger Mathisen is a nutrition specialist for UNICEF in Hanoi. He said part of the problem is people in Vietnam believe advertising is a source of facts. He said they do not realize that sometimes it is, in his words, "propaganda."

In recent years, Vietnam has cut back on its milk campaign. It now bans advertisements for milk-based products targeting children under two years old. But it continues to push Vietnamese to drink milk.

Increased amounts of food are not the only reason more and more people in Vietnam are becoming overweight. Many people are moving to cities from rural areas. That means they are much less physically active than they were. Many people who once worked on farms are now working in offices. In 2011, Vietnam's General Statistics Office reported that "the obesity rate in urban areas is three times greater than in rural areas." It said the rate was 8 percent in cities and 3.1 percent in the countryside.

On a recent trip to Ho Chi Minh City, Mr. Waibel said it is "not very pedestrian-friendly and there are no bicycle lanes to my knowledge."

Vietnamese officials have paid little attention to physical activity. But they continue to be very concerned about undernourishment. UNICEF says 28 percent of Vietnam's children are not as big as they should be. This is especially a problem in rural areas of the country. But people who live in cities are often overweight. So government policies must be different depending on whether an area is rural or urban.

Mr. Mathisen says there is a way to solve both kinds of malnutrition at once. He says Vietnam must help people learn to eat a balanced diet. He says such "food diversity protects against both undernutrition and overweight problems." He says that is one good solution that will deal with both problems.

This story was written by Lien Hoang in Ho Chi Minh City and adapted for Learning English by Christopher Cruise. It was edited by George Grow and narrated by Jim Tedder.

underweight – adj. weighing less than what is considered normal or required

separate – v. to keep people or things away from or independent from others

shortage – n. a lack of something

hunger – n. the need for food

Now it's your turn to use these Words in the News. In the comments section, write a sentence using any of these words and we will give you feedback on your use of vocabulary and grammar.