Is North Korea Preparing to Strike US Electric Grid?

Update Required To play the media you will need to either update your browser to a recent version or update your Flash plugin.
By VOA
25 August, 2014


A longtime national security advisor to the United States Congress has said the country's electric system -- called a "grid" -- is mostly unprotected.

Peter Vincent Pry believes North Korea is ready to attack the U.S. electric grid using electromagnetic pulse, or EMP. He said North Korea tested the plan last year when it put a satellite into orbit. The satellite was in a position where it could carry out such an attack against the United States. 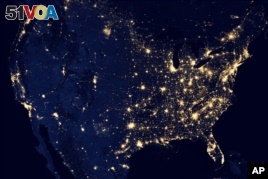 This NASA image, assembled from data acquired by satellite between April and October 2012, shows the United States at night time.

An electromagnetic pulse is a short "burst" of electromagnetic energy. It can be natural or created by humans. EMP bursts from lightning can damage electronic equipment. At very high levels, an EMP can damage trees, buildings and aircraft.

Mr. Pry said North Korea tested EMP in February of 2013 over the South Pole. The test was done after the country's third illegal nuclear test.

Later in 2013, a North Korean cargo ship was stopped as it carried missiles through the Panama Canal. The missiles were hidden under thousands of bags of sugar.

Mr. Pry said this was not a mistake by North Korea. He believes North Korea was testing to see if it could send nuclear weapons through the Gulf of Mexico and the Panama Canal without being caught.

Rep. Yvette Clarke of New York is the senior Democrat on the Homeland Security Subcommittee on Emerging Threats, Cybersecurity, Science and Technology.

She said she did not know North Korea purposely acted, in her words, "to test out or test run the capabilities of approaching" the United States with nuclear-capable missiles. But, she said she is, again in her words, "sure it is not for the sake of friendly trade, but to do our nation harm."

Mr. Pry said a group of Russian generals and two of Russia's top EMP experts met with the EMP commission in 2004. The Russians talked about the development of a technology for a high-energy EMP attack near the end of the Cold War. It was a kind of nuclear weapon that would produce a very powerful electromagnetic pulse.

The Russian generals told the commission, "We have bad news. We developed this super EMP weapon, and during the post-Cold War brain drain, some of our scientists went to North Korea.'"

At the time, Mr. Pry said, the Russian generals told them that North Korea could develop a super EMP weapon within a few years.

system – n. a method of organizing or doing something by following rules or a plan; a group of connected things or parts working together for a common purpose or goal

position – n. a place; the way of holding the body; the way a thing is set or placed; a job (or level of a job) in an organization

damage – v. to cause injury or destruction; n. harm, hurt or injury usually to things

mistake – n. a wrong action or decision; an action done without the knowledge it was wrong

powerful – adj. having the ability to control or influence people or things; having a strong effect on someone or something; having or producing a lot of physical strength or force