Israel and the Palestinians Agree to Truce

Update Required To play the media you will need to either update your browser to a recent version or update your Flash plugin.
By VOA
26 August, 2014


Israeli and Palestinian negotiators announced Tuesday that they have agreed to an extended ceasefire after seven weeks of deadly fighting in Gaza.

Egypt organized the truce. It calls for Israel to ease its blockade of Gaza. The agreement will permit shipments of humanitarian aid and building materials for repair and reconstruction in Gaza. The two sides will continue talks about Israel's demand that Hamas militants surrender their weapons.

The United States said it strongly supports the truce. 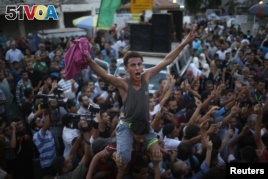 Over 2,000 Palestinians, mostly civilians, and more than 60 Israelis were killed in the almost two month long conflict.

Mr. Poroshenko said the conflict would end with a secure border for Ukraine. He said there must be a block to transports of arms from Russia to the rebels.

Mr. Putin demanded that Russia be permitted to meet with the rebels and supply humanitarian aid.

This week lawmakers from Cambodia's opposition party are being voted onto 10 parliament committees. The vote is one term of a political deal to end the country's political crisis.

Son Chhay, a leader of the opposition expressed hope for the future. He said the agreement was a very good beginning.

"Breaking Bad" was honored at the Primetime Emmy Awards on Monday as the top drama series on U.S. television. The show received the Emmy for a second straight year. It also won three acting awards.

In comedy, "Modern Family" won the Emmy for best series. It has won the award the last four years as well.

truce – n. a temporary halt in fighting agreed to by all sides involved

fail – v. to not succeed; to not reach a goal

term – n. a limited period of time during which someone does a job or carries out a responsibility ("He served two terms in Congress."); the conditions of an agreement that have been accepted by those involved in it

series – n. a number of similar things or events that follow one after another in time, position or order

suicide – n. the act of killing oneself