Update Required To play the media you will need to either update your browser to a recent version or update your Flash plugin.
By VOA
03 September, 2014


The Federal Aviation Administration, or FAA, has chosen a university town in Virginia as one of six places to test drones. Drones are aircraft without human pilots. A drone can also be called an unmanned aircraft system, or UAS. The town, Blacksburg, is home to Virginia Tech University.

The university has flown and researched unmanned aircraft systems for years. But now, the research has more meaning. Researchers at Virginia Tech send reports to the FAA to assist the agency in the development of national drone rules. The FAA says most business drones cannot operate legally now. The agency plans to announce rules for how drones can share airspace in the United States with major airplane companies.

The leader of the Blacksburg test center is Rose Mooney. She says that her researchers are doing new things with UAS.

“UAS can do things that manned aircraft can’t. Our first flight is going to be a larger aircraft that hasn’t been flown unmanned in the national airspace.”

Air information sensors are common on manned airplanes. But researchers at the Virginia Tech University test center have added a sensor to their drones. The sensor records air speed and altitude, the height of the flight. The information is sent through tubes to a computer that examines stability. All of the information is then sent to the FAA. 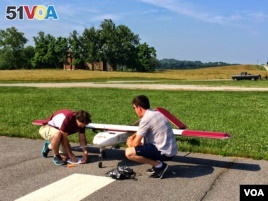 The federal agency may also rule on another device to guarantee greater safety. The device is a special eyewear that lets a person see the flight as if he or she is on the drone. Pilots on the ground can use this view to better direct the drone and keep it away from objects in the flight path. 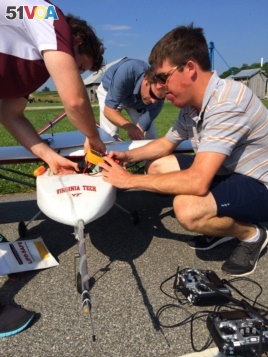 Researcher Justin Stiltner says drones can be used to do jobs that are uninteresting, dirty or dangerous. They can fly into areas of radiation, or inside hurricanes or over croplands to examine corn. Professor Craig Woosley says farm studies are the main goal.

“We need to do better at how we do agriculture so we can continue to improve crop yields and that drives us toward ever more and more technology. “

Rose Mooney thinks using drones is a huge step forward in the flight industry. But drone use will not change until the FAA publishes new rules. And that is not expected to happen until late 2015.

The FAA will also conduct drone tests at the University of Alaska, Texas A & M University, Griffiss International Airport in New York, the state of Nevada and the state of North Dakota.

This story is based on a report by Carolyn Persutti, adapted by Jonathan Evans and edited by Catherine Weaver.