Update Required To play the media you will need to either update your browser to a recent version or update your Flash plugin.
By Alice Bryant
21 March 2021


Mayra is a 17-year-old migrant from Guatemala who recently crossed the Rio Grande River with her small child Marvin on her back. The river marks the border between the U.S. state of Texas and Mexico.

Mayra had joined a group of about 70 migrants that crossed the river in the dark on small rafts. The group was mostly Guatemalan and Honduran women with young children and about 25 teenagers traveling alone. Mayra hoped that, as a teenaged mother, she would be permitted to stay in the United States.

The group is among the thousands of migrants who have been crossing the U.S.-Mexico border in recent weeks. The administration of President Joe Biden is trying to put the migrants in government housing during the coronavirus health crisis.

A top Biden administration official said the number of migrants arriving at the U.S.-Mexico border in 2021 is expected to be the highest in 20 years. At least 9,200 children, who had arrived without adults, are in custody of the Office of Refugee Resettlement. That government agency deals with migrant children.

Mayra's group arrived in Penitas, Texas after crossing the river. The teens and parents then made the final part of their trip: walking to the U.S. border wall. There, they waited for U.S. border officers to take them into custody.

Mayra went down a dirt road in between cotton fields on the way to the tall metal wall. Her baby was tired and crying.

"I heard on the news that mothers with their babies and minors could come," she said.

When a neighbor offered to help pay for her trip, she felt like she had no choice. Her father was dead. Her mother's health was getting worse. She was earning $5 a day planting corn. She sometimes took extra work washing clothes. Marvin's father had disappeared. He left us, she said while crying. "We have nothing."

The group spent the final night of their trip on the floor of an empty building on a farm near the river. "We slept like animals," one young mother said. 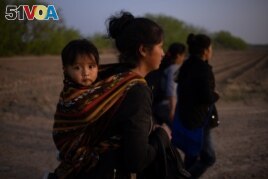 Mayra, a 17-year-old asylum-seeking mother from Guatemala, carries her 13-month-old son Marvin after they crossed the Rio Grande river into the United States from Mexico on a raft in Penitas, Texas, U.S., March 17, 2021. (REUTERS/Adrees Latif)

People in the group said word is spreading in Central America that people aged 17 and under and mothers of young children can enter the country. These claims, they said, caused them to take the long trip – in buses, on foot, and in trucks – to get to the Rio Grande River.

Biden has said he wants to follow a more humane immigration policy than the policies of former president Donald Trump. Biden has begun to let in children who are not traveling with a parent or guardian. But he has kept in place Trump's public health order that closes the border to almost all asylum seekers.

Some families with young children are also being let into the United States. That is partly because one Mexican border state, Tamaulipas, would not accept their return.

However, Biden administration officials have urged migrants not to make the dangerous trip north. They explain that the border is not open and that most people crossing the border illegally will be sent back.

Keiby is a 17-year-old woman from Honduras. She was the first among Mayra's group to arrive at the border wall. There was an open gate with no patrol agents, so she walked through and sat down to rest. She had heard she could be sent to a shelter for a few weeks before rejoining her family in the United States.

She was excited to reunite with her mother, whom she had not seen for 14 years. "Now it's finally real" she said. "Thank God."

Members of the U.S. military arrived in a truck and offered water to the migrants. A border patrol truck also arrived and agents stepped out.

Then more agents arrived, separating the unaccompanied children, mostly teens, from those traveling as families.

The border patrol agents lined up the minors likely to be traveling without adult guardians against large vehicles. They sat the families against the wall.

Mayra stood at the end of the line of minors. Worried and crying, she fed Marvin and waited for border patrol agents.

She said she has family members in New York and would like to start a life there in order to provide for her child. She also wants to send money back to her mother in Guatemala to buy medicine.

"I hope they'll let me go to my sister," she said.

migrant –n. a person who goes from place to place especially to find work

raft –n. a flat structure used to float on water like a boat

humane –adj. kind or gentle to people or animals

patrol –n. people or vehicles that go through an area to make sure it is secure

gate –n. an entrance in a fence or wall

unaccompanied –adj. without another person; alone; without someone who is responsible

minor –n. a person who is not yet old enough to be considered an adult