Update Required To play the media you will need to either update your browser to a recent version or update your Flash plugin.
By Alice Bryant
15 March 2021


A message from Afghanistan's education ministry that banned girls over 11 years old from singing at events has received a lot of attention recently.

News of the ban has spread on social media. Afghan officials have reacted by saying the memo was a mistake. They said that the writers of the document misunderstood the memo's goal. 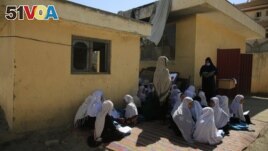 However, the hashtag #IAmMySong is gaining popularity on Twitter. Some Afghan girls are singing their favorite songs on video and putting their performances on the internet.

Rights groups want to ensure that human rights gains of the last 20 years in Afghanistan remain central to peace talks with insurgents. The Afghan government is trying to negotiate a peace agreement with Taliban rebels.

Sima Samar has been an Afghan human rights activist for nearly 40 years. Speaking about the memo, she said, "This is Talibanization from inside the country."

When they ruled the country, the Taliban denied girls the right to education. Music, except religious songs, was banned for everyone, as was television.

The disputed memo was sent to all schools in Kabul. However, it was canceled, said ministry spokeswoman Najiba Arian. She said the memo writers had misunderstood its purpose. A new memo was sent after the first one. It said music groups for secondary school girls and boys are banned.

The real goal was to prevent boys and girls from going to public events that could spread the coronavirus, she said. Afghanistan has recorded more than 55,000 cases of the virus and 2,451 deaths. But there has not been enough testing and the real numbers are believed to be higher.

The hashtag campaign was started by Ahmad Sarmast, the founder of Afghanistan's Institute of Music. He began #IAmMySong to let officials know "that the people of Afghanistan oppose this decision and they will stand for the rights of the children, whether boys or girls."

Haroon Baluch is with BytesforAll, a Pakistan-based rights organization that studies internet traffic. He said that the hashtag has gotten over 600,000 clicks and continues to grow.

The Associated Press looked at a copy of the memo, which does not talk about the pandemic or health concerns.

It states that educators in Kabul, the government and private companies are "seriously advised" not to let females aged 12 and up sing at events. The only exception is at all-female gatherings.

The memo also says that only female teachers can teach music to girls older than 12 years of age.

Sarmast of the Institute of Music said the memo violates both national and international law.

After the reaction to the first memo, a second one went out but it too was criticized. It reportedly bans both boys and girls older than 12 from singing or performing in public. Sarmast said it takes "the right of choice and freedom of expression away from all students in secondary and high schools."

The education ministry has had to deal with other problems recently. In December, it was criticized after suggesting that children in first through third grade be taught in Muslim religious centers known as mosques. After a strong reaction, the ministry made a correction. The ministry said it meant that, in poor rural areas where there are no school buildings available, mosques are the only choice.

memo (memorandum) –n. a short, written message or report form one person or department in a company or organization to another

hashtag –n. a word or phrase that starts with the symbol # and that shows what a message, such as a tweet, is about

insurgent –n. a person who fights against an established government

click –n. the act of choosing something on a computer screen by pressing a button on a mouse or some other device