Update Required To play the media you will need to either update your browser to a recent version or update your Flash plugin.
By Anna Matteo
21 March 2021


In the Iraqi desert, a 72-year-old woman carefully digs in the sand for treasure.

"Here it is, the truffle, a blessing from God!" says Zahra Buheir. 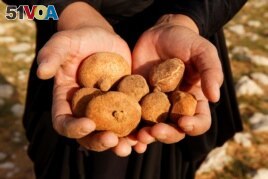 A handful of truffles found in the desert in Samawa, Iraq, February 23, 2021. (Reuters Photo/Alaa Al-Marjani)

In her hands, she holds a truffle, a kind of fungus that grows under the ground. It is used in cooking around the world and is a costly food.

She said, "rain came, and then thunder, bringing truffles up to the surface."

She and her family of seven have spent weeks looking for seasonal truffles. The rare food has provided the family with additional money.

Learning to hunt for truffles requires an understanding of the dangers in the desert. The hunters must deal with the severe weather of Iraq's southern desert. There are dangerous animals and military equipment left from years of war.

The father of her granddaughter is Mohsen Farhan. He said, "We are afraid of wolves. There are a lot here. And there are mines. A while ago, someone died."

Landmines left over from the Gulf war in 1991 remain unexploded and underground. The explosive devices could be mistaken for truffles by an inexperienced person.

But to some, the dangers are worth it. This year, truffles can be sold for up to $7 a kilogram. Iraq's desert truffle costs less than European truffles. Those are rarer and can cost hundreds of dollars or more for a kilogram.

But Iraq's economy is in crisis. So, the local truffles are a big help to this truffle-hunting family.

This year, however, the rains came late. Buheir could only find about one kilogram of truffles each day. That amount is about one tenth of what she would dig up in a good year.

Her granddaughter, five-year-old Riyam, helps by turning over stones and digging the earth with her hands. The child joins the truffle hunt with her family to learn a trade and the desert lifestyle.

"When there is no work, truffles are a source of income. And we are happy here," said Farhan. The child's father said he loves the weeks he spends with his family in their tent in the desert.

Truffles come in many different sizes. When they are sold, they are named for other foods they are most like in size – for example, walnuts, eggs, or oranges. The biggest truffles are called pomegranates.

This year, a lack of truffles has pushed up prices. Truffles that do not sell locally are exported to wealthier Gulf countries. But people who eat at the restaurants in the Iraqi city of Samawa enjoy many truffle dishes.

fungus –n. a group of living things such as mushrooms that grow on organic material that is breaking down

thunder –n. the loud sound of lightening during a storm

income –n. money that is earned from work, investment or business

tent –n. a cloth shelter used outdoors that can easily be moved around