Experts Search for Cause of Long-Term COVID-19 Sickness

Update Required To play the media you will need to either update your browser to a recent version or update your Flash plugin.
By John Russell
21 March 2021

Now, a year later, Van Lear is still waiting for her COVID-19 symptoms to disappear -- and for experts to come up with some answers. 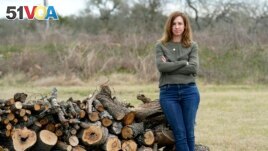 Rachel Van Lear is at her home in Buda, Texas, Tuesday, March 9, 2021. On the same day a global pandemic was declared, she developed symptoms of COVID-19. A year later, she's still waiting for them to disappear. (AP Photo/Eric Gay)

The Texas woman is among tens of thousands of COVID patients known as long-haulers. Long-haulers have symptoms that continue or reappear months after they first became infected with coronavirus.

It is unclear how many people are experiencing the condition and why it is happening. "We're faced with a mystery," said Dr. Francis Collins, chief of the United States National Institutes of Health.

How many people are affected, and how long does it last? Is it limited to COVID-19 disease or can other infections lead to the condition? Could some symptoms be unrelated to COVID-19?

The U.S. Congress is providing $1 billion to Collins' agency, the NIH, to seek answers for those questions and more. So, the NIH is designing studies to follow at least 20,000 people who have had COVID-19.

Collins said the agency has never dealt with a long-hauler condition as widespread before. "We don't have time to waste," he said about the research.

There have been an estimated 30 million U.S. cases of COVID-19, and 119 million worldwide. Even a small percentage of patients that develop long-term health issues could become a major problem.

And, medical experts have reported organ damage among long-haulers, including lung scarring and enlarging of the heart.

Scientists aim to understand whether these symptoms are directly linked to the virus or to some other health issue.

"Is it just a very delayed recovery or is it something even more alarming and something that becomes the new normal?" Collins said.

There are few stories about what might be causing the long-lasting symptoms. One is that the virus remains in the body at very low levels but still causes organ or tissue damage.

Another possibility is that the virus activates the body's natural defense system and somehow prevents that system from returning to normal.

A third idea is that the virus causes small blockages to form in blood vessels, the tubes through which blood travels.

The 35-year old Van Lear says she was in great health when she got COVID-19. She was a busy mother of three who exercised often.

First came a chest cold, then a rise in body temperature. Testing showed she did not have a flu infection.

Soon after, she developed severe headaches, fatigue and stomach sickness. Her symptoms were so severe she sought emergency room treatment.

"I was very scared because no one could tell me what was going to happen to me," Van Lear said.

Over the next several months, symptoms would come and go: burning lungs, a very fast heartbeat, shaking hands and hair loss. While most have disappeared, she still sometimes experiences a racing heartbeat.

Van Lear is a member of Survivor Corps, one of several online support groups formed during the COVID health crisis. The group has thousands of members. Some are taking part in studies to help speed research.

Lindsey Tanner reported on this story for the Associated Press. John Russell adapted it for VOA Learning English. Caty Weaver was the editor.

scar – v. to make marks on (something) that show damage or wear

alarm – v. to cause (someone) to feel a sense of danger : to worry or frighten (someone)