Update Required To play the media you will need to either update your browser to a recent version or update your Flash plugin.
By Bryan Lynn
15 September 2021


An Israeli military contractor has built an armed, unmanned robot designed to be deployed in many battle situations.

The vehicle is called Rex MK II. It was developed by state-owned contractor Israel Aerospace Industries, also known as IAI. The robot is semi-autonomous, with the ability to perform some operations on its own. It can also be guided by humans remotely through an electronic controller.

Officials from IAI said the vehicle was built to support Israeli military ground forces in different levels of fighting. It can carry equipment and supplies, gather intelligence and open fire at nearby targets.

The robot can carry two machine guns and a series of cameras and sensors to support military activities. It was also designed with the ability to transport injured soldiers. 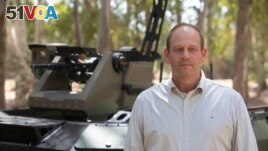 Rani Avni helps lead the development of autonomous systems for IAI. He told The Associated Press the Rex MK II is the most advanced in a series of unmanned vehicles developed for the Israeli military over the past 15 years.

Israel's military is currently using a similar but smaller vehicle called the Jaguar. The Jaguar is used to guard Israel's border with the Gaza Strip. The Islamic militant group Hamas took control of Gaza from the Palestinian Authority in 2007. As a result, Israel closed off its border with Gaza and enforces a blockade.

Gaza is home to 2 million Palestinians who face the blockade, which is supported by Egypt. Protests take place there and Palestinian militants and laborers try to cross over into Israel.

The Israeli army's website states that the semi-autonomous Jaguar was designed to reduce danger to soldiers working along the Gaza-Israel border. The Jaguar also carries a machine gun and is one of many technology tools used by the Israeli military. The army also has used drones with guided missiles in operations against Hamas forces.

Unmanned ground vehicles are increasingly being used by other armies. Countries include the United States, Britain and Russia. They are designed for things like providing operational support, removing landmines and firing weapons.

The military contractor says the new Rex MK II can complete many actions on its own, such as controlling movements and carrying out surveillance. Actions such as firing a weapon require a human to operate the electronic controller.

Critics have raised concerns that robotic weapons could decide on their own, possibly mistakenly, to shoot at targets. The company said that while the new robotic vehicle was developed with that ability, the current version being offered does not have it.

"It is possible to make the weapon itself also autonomous, however, it is a decision of the user today," developer Rani Avni said. "The maturity of the system or the user is not there yet," he added.

Yonni Gedj is an operational expert in IAI's robotics division. He said the robot is built to become smarter over time. "With every mission, the device collects more data which it then learns from for future missions," he told the AP.

Bonnie Docherty is a researcher with the arms division of Human Rights Watch. She said such weapons can be dangerous because they cannot be trusted to recognize soldiers from civilians. The robots are also not equipped to make the right decisions about the harm attacks could cause to civilians.

"Machines cannot understand the value of human life," Docherty said. This "undermines human dignity and violates human rights laws," she added. In a 2012 report, Docherty called for fully automated weapons to be banned by international law.

remote – adj. far away, from a distance

surveillance – n. the process of getting information about a place or an area for military use

maturity – n. the time when someone or something is completely grown or developed

undermine – v. lessen the effectiveness, power or ability of something

dignity – n. the state of being worthy of honor or respect