What Is the ‘Metaverse’ Tech Companies Aim to Build?

Update Required To play the media you will need to either update your browser to a recent version or update your Flash plugin.
By Bryan Lynn
12 September 2021


You may have heard the term "metaverse" to describe a new virtual world that major technology companies aim to develop. What are some of the goals of this planned world and how might it change our lives?

What does metaverse mean?

The word is a combination of the prefix meta – which means beyond – and verse, which relates to the universe. The term appeared in the 1992 science fiction book Snow Crash, by writer Neal Stephenson. In his story, people wore virtual reality (VR) headsets to interact inside a game-like technology world.

Metaverse describes a non-physical world in which individuals can interact through different kinds of virtual technology.

For example, a metaverse could permit people living on different sides of the world to meet up through technology and virtually go on a vacation, play sports or work together on projects. People linked to the metaverse would be connected at all times and physical distance would not limit their ability to interact.

What technologies will be used?

The main technologies that would drive such a world would be virtual reality, or VR, and augmented reality, AR. Other, yet-to-be invented technologies would likely also be used to improve experiences within the metaverse.

What companies are involved?

One of the biggest fans of a proposed metaverse has been Facebook chief Mark Zuckerberg. He has spoken over the years about how such a world would fit in with his company, a massive social media service with international reach. 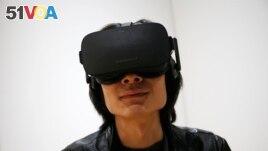 Facebook has backed the idea by investing a lot of money in VR and AR technologies, including the development of headsets that promise to create the most realistic virtual interactions possible. The company also announced in July that it had created a new team to specifically develop metaverse products.

Earlier this year, Zuckerberg called the metaverse the "next generation of the internet and next chapter for us as a company." He said the plans would create "entirely new experiences and economic opportunities."

Google has also been developing VR and AR tools that aim to "bridge the digital and physical worlds." One of its latest tools is called Google Lens. It enables users to use a device's camera to capture an object. The technology then uses image recognition and Google's search system to describe what the object is and provide information about it. Such a system could one day be used with headsets in a metaverse.

Apple has also reportedly been working on the development of AR smart glasses that could launch as soon as next year.

And in May, Microsoft explained how it was developing a series of "metaverse apps" designed to help business users of its Azure cloud computing service combine virtual and physical elements.

With the help of augmented reality glasses, individuals might be able to see a wealth of information pass before their eyes while moving around in a city. This could include traffic and pollution data, information on the natural environment or local history.

However, most predictions for a future metaverse see the technology going much further. These include the ability for people to be transported to digital settings that feel very real, such as a nightclub, a sports stadium or a mountaintop.

A metaverse environment might look a lot like many of the online video games that are popular today. These involve players around the world interacting in virtual environments and even permit users to buy digital items with real money.

Cathy Hackl is a technology expert who advises companies on the metaverse. She told the French press agency AFP that the younger generation is much more willing to attach real meaning to virtual experiences and objects. One example she gave would be a musical performance.

"My first concert was in a stadium. My son's first concert was (American rapper) Lil Nas X on (the gaming system) Roblox," Hackl said. "Just because it happened in Roblox, it didn't make it less real for him," she added.

Bryan Lynn wrote this story for VOA Learning English, based on reports from The Associated Press, Reuters, Agence France-Presse and Facebook. Susan Shand was the editor.

chapter – n. a period of time when something happens

opportunity – n. a situation in which it is possible for a person to do something

nightclub – n. a place where you can dance and drink at night

stadium – n. a large, open area with seats around it where sports games and other events take place

concert – n. a performance of music and singing