New Details on Asteroid Strike That Killed Off the Dinosaurs

Update Required To play the media you will need to either update your browser to a recent version or update your Flash plugin.
By Bryan Lynn
15 September, 2019


Researchers say they have discovered new details about the day an asteroid hit Earth and killed off the dinosaurs.

Scientists believe the asteroid struck the Earth about 65 million years ago near what is today Mexico's Yucatán Peninsula.

The force of the massive asteroid crash is estimated to have been equal to the strength of about 10 billion nuclear bombs. The U.S. Space Agency NASA has estimated the strike created a huge crater about 180 kilometers wide and 900 meters deep.

The event is believed to have caused widespread wildfires, earthquakes and ocean waves, or tsunamis. It also released chemicals into the atmosphere, leading to severe cooling that harmed many living things. 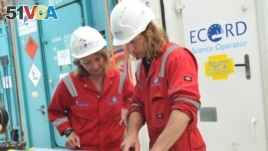 Lead author of the study Sean Gulick, a research professor at The University of Texas at Austin Jackson School of Geosciences (right), with co-author Joanna Morgan, a professor at Imperial College London, on the International Ocean Discovery Program

Scientists blame this climate-changing event for causing the extinction of more than 70 percent of plant and animal life. In addition, all dinosaurs, that were not bird-like, died out.

The crater remained hidden until the late 1970s, when it was first discovered beneath the ocean by a team searching for petroleum. The theory about an asteroid causing the extinction of the dinosaurs was first presented by two American scientists in 1980.

Studies based on materials collected over the years from off the coast of the Yucatán Peninsula led most scientists to agree that an asteroid struck in that place. In 2016, a team went to the area to drill down into the ground beneath the crater to bring up rock samples.

One of the leaders of that team was Sean Gulick, a research professor at the University of Texas Institute for Geophysics. He also led a new study that researchers say provides more evidence and details about the destruction caused by the asteroid.

The study involved the examination of more than 130 meters of rock believed to have built up in the seconds and hours after the asteroid strike. The findings were recently published in the Proceedings of the National Academy of Sciences.

"It's an expanded record of events that we were able to recover from within ground zero," Gulick said in a statement. "It tells us about impact processes from an eyewitness location." He added that the rock record "offers the most detailed look yet" into the period immediately after the asteroid impact.

The researchers noted that the buildup of material was one of the largest in Earth's history. The materials and formations in the rocks provide evidence of what was happening in the environment right after the event.

By examining the rocks, the team found evidence that most of the material that filled the crater after the strike was produced where the impact happened. This included materials that were vaporized from the blast. Some of the material was carried in by seawater pouring back into the crater from the surrounding Gulf of Mexico.

The researchers also found evidence of burned material, sulfur and dust. They believe these substances were vaporized and entered into the atmosphere. They said that these substances blocked the sun's heat and caused the Earth to cool.

The team also found material they believe came from the fungal breakdown of wood within or just above layers of sand. This also showed signs of trees and plant life being drawn into the crater by resurging waters, likely caused by a huge wave, or tsunami.

Sean Gulick said the evidence suggests that a large heat blast, followed by a period of intense cooling killed off the dinosaurs. "We fried them and then we froze them," he said.

Gulick noted that the study provides clear evidence that the dinosaurs did not die from the asteroid impact. Instead, the research suggests they did not survive the resulting climate conditions.

"The real killer has got to be atmospheric," Gulick said. "The only way you get a global mass extinction like this is an atmospheric effect."

Bryan Lynn wrote this story for VOA Learning English, based on reports from the University of Texas at Austin, PNAS and NASA. Mario Ritter Jr. was the editor.

extinction – n. when a type of animal no longer exists

drill – v. make holes in hard materials with a machine

impact – n. the force or action of one object hitting another

vaporize – v. to turn from a solid or liquid into a gas

fungal – adj. caused by a fungus