New Study: Black Hole May Be Larger Than Expected

Update Required To play the media you will need to either update your browser to a recent version or update your Flash plugin.
By John Russell
27 February 2021


A recent study found that the first black hole ever discovered is a lot bigger than scientists first thought.

Black holes are extremely massive space objects whose gravity is so powerful not even light escapes. The black hole, Cygnus X-1, was discovered in 1964. It is well-known for being the object of a friendly bet between two famous scientists. 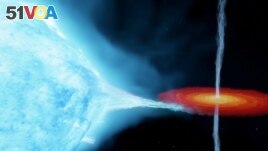 FILE - An artist's impression of the Cygnus X-1 system, with a so-called stellar-mass black hole orbiting a companion star some 7,200 light years from Earth. (International Centre for Radio Astronomy Research/Handout via REUTERS)

Researchers found that new observations of Cygnus X-1 showed it is 21 times our sun's mass. That is about 50 percent more massive than scientists had believed.

While it is still one of the closest black holes known, the scientists found it is farther away than earlier estimates suggested. It is 7,200 light years away. A light year is the distance light travels in one year.

Cygnus X-1 is the Milky Way's largest-known stellar-mass black hole. It is among the strongest X-ray sources seen from Earth, said James Miller-Jones of Curtin University and the International Centre for Radio Astronomy Research in Australia. Miller-Jones led the study that appeared in the publication Science.

The black hole brings in material that comes from the surface of the star that it orbits. This star is a "blue supergiant," a very large star about 40 times our sun's mass.

Cygnus X-1 started to exist 4 million to 5 million years ago as a star up to 75 times more massive than the sun. But then it collapsed into a black hole a few tens of thousands of years ago.

The research included data from the Very Long Baseline Array radio telescope. It is made up of 10 observation stations in the United States.

Miller-Jones, the leader of the recent study said, "Indeed, I did not have any wagers riding on these findings."

source – n. the place where something starts from