Update Required To play the media you will need to either update your browser to a recent version or update your Flash plugin.
By Phil Dierking
05 August, 2017


Officials say Afghan children are being taken to Pakistan to study at religious schools in areas controlled by the Taliban extremist group.

Officials say each year there are at least three or four cases of children being illegally transported from Afghanistan to Pakistan.

In Pakistan the children are taken to religious schools, called madrassas. Authorities say the goal is for the children to later return to Afghanistan and enforce the same severe version of Islam observed by the Taliban.

The Taliban was removed from power in Afghanistan in 2001 by United States-led coalition forces. 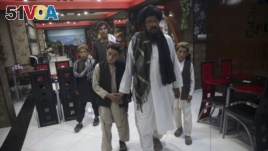 In this photo taken July 25, 2017, Mohammed Naseer, with black turban, holds his sons' hand when they enter a Pizza Restaurant in Kabul, Afghanistan. Mohammed Naseer spent several weeks arranging for his son, a nephew and several other children from his d

One Afghan counterterrorism official spoke to the Associated Press about the issue. The officials said Afghan authorities have identified 26 madrassas in Pakistan. They are suspected of training future generations of Taliban members. In some cases, students are trained in carrying out suicide bombings.

Police have stopped vehicles traveling from Afghanistan's eastern Ghazni province to Quetta, in Pakistan's southwestern Baluchistan province. After searching the vans, police found groups of boys between the ages of four and 15. They were all being taken illegally to Pakistan to study at madrassas.

Quetta is important to Afghanistan's Taliban. It is the capital of Pakistan's Baluchistan province and shares a border with Afghanistan. Many Taliban members graduated from madrassas there. It also is considered the headquarters of the Taliban leadership council, often called the "Quetta shura."

Several of the 26 madrassas identified as Taliban training centers are in Quetta.

One of the madrassas in Quetta is called Sheikh Abdul Hakim. Azizullah Mainkhail, a teacher at the madrassa told the Associated Press that some students there were from Afghanistan. However, he said the majority are Pakistanis from villages throughout Baluchistan. He denied any connection with the Taliban.

Mohammed Musa Mahmoodi is with the Afghan Independent Human Rights Commission. He said a number of issues have aided the movement of children from Afghanistan. These include war, poverty, insecurity and a lack of understanding by the parents of the dangers for their children.

However sometimes parents say they want their children to study in Pakistan.

"Parents often agree to send their children but they don't know what is awaiting the child. Sometimes they are told they will be educated or will get a good job and be looked after," said Mahmoodi. "But when they get there they are beaten, forced to work as cheap labor, or taken by Taliban as new recruits."

Mohammed Naseer wanted his son, a nephew and several other children from his area to study the Quran, the Muslim holy book, in Quetta. His son Mohammed Yaseen is just 9 years old, but he said he was excited to be going to Quetta. His dream: "I want to be a mullah [or a cleric]."

Naseer said his son had studied three years in a village school but he still could not read or write in his native Pashto language. He said the village school offers English lessons but the teacher does not speak English.

He also worries about the lack of quality Islamic schools where his son can study Islam. So, he decided then to send his son to Pakistan.

He put his son with 26 other children into the two vans. He gave his son a change of clothes and gave money to the men taking his child to Pakistan "but only for transportation."

These stories are common, but senior police official Fazlur Rahman Bustani in Kabul said the movement of children is a dangerous business.

"Those involved in the transport of children are part of a dangerous network and it is a criminal act," said Bustani. "It doesn't matter if the parents approve."

Phil Dierking adapted her report for VOA Learning English from an Associated Press report. Mario Ritter was the editor.

Quran – n. the book of sacred writings used in the Muslim religion

smuggle - v. to move (someone or something) from one country into another illegally and secretly