Update Required To play the media you will need to either update your browser to a recent version or update your Flash plugin.
By Gregory Stachel
18 April 2022


The famous Boston Marathon race returned to its usual date this year for the first time since the start of the COVID-19 pandemic. This year also marked the 50th anniversary of women's inclusion in the world's oldest yearly marathon.

In the women's division, Olympic gold medalist Peres Jepchirchir of Kenya placed first in an exciting finish. She and Ethiopia's Ababel Yeshaneh traded places eight times in the last 1.6 kilometers of the race. Jepchirhir pulled ahead of Yeshaneh in the final 352 meters. She finished the 42.2-kilometer race in 2 hours, 21 minutes and one second -- four seconds ahead of Yeshaneh. Kenya's Mary Ngugi came in third. 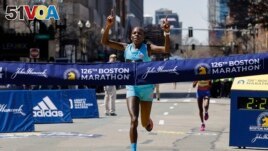 Thousands of fans filled the streets of Boston to cheer on the runners. Many of them waved Ukrainian flags in support of the Ukrainian runners who took part. Runners from Russia and Belarus were not permitted to take part because of Russia's invasion of Ukraine.

Event organizers said 44 Ukrainians had registered to run. Only 11 of them lined up to start the race, however.

Ukrainians who were unable to make it to Boston because of the war were offered their money back or were told they can race another year.

"Whatever they want to do, they can do," said Boston Athletic Association President Tom Grilk. "There is no group we want to be more helpful to."

More than 28,000 runners took part in this year's race. Among them was American Valerie Rogosheske. She finished sixth in the first-ever women's race in 1972. She ran this year with her daughters and also served as the honorary starter of the women's division.

She said she had been planning to hide in some plants and run in the 1972 race unofficially before women got approved to take part a few weeks before the event.

She said that, at the time, "Many people didn't think we [women] should be running a marathon."

Nina Kuscsik won the 1972 women's race. She is considered the event's first official women's winner. However, Bobbi Gibb was the first woman to finish the race. She completed the full marathon back in 1966. She was among the unofficial runners known as bandits.

medalist – n. a person who receives or wins a medal

bandit – n. a criminal who attacks and steals from travelers and who is often a member of a group of criminals

marathon – n. a running race that is about 26 miles (42 kilometers) long