Update Required To play the media you will need to either update your browser to a recent version or update your Flash plugin.
By Ashley Thompson
08 December 2021


The COVID-19 pandemic has led to emptier coastal areas around the world. Animals like sea turtles have used the chance to reclaim the less-polluted, quieter beaches to lay their eggs during the breeding season. The main breeding season for sea turtles goes from September to November.

Workers from the Sindh Wildlife group in Pakistan recently watched as a female turtle walked across the beach in Karachi late one night. She was looking for a place to lay her eggs. She buried a hundred or more eggs in the sand before heading back out into the Arabian Sea. 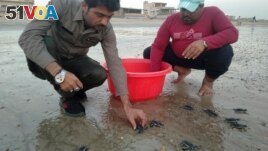 Officials from the Sindh Wildlife Department release baby turtles as they return to the sea in Karachi, Pakistan November 17, 2021. (REUTERS/Waseem Sattar)

Sindh Wildlife counted 15,000 green turtles on Karachi's beaches last year. By comparison, the group counted between 8,000 and 8,500 in 2019. Pandemic-related lockdowns there had ended by the start of this year's breeding season. But animal experts still expect a large number of the endangered animals to visit.

Green turtles are among the world's largest sea turtles. Adults can weigh more than 90 kilograms. They lay their eggs in more than 80 countries around the world and can be found in more than 140 countries. They live in tropical and subtropical coastal areas. The conservation group Sea Turtle Conservancy says there are 85,000 to 90,000 nesting females worldwide.

The weather in Karachi is good for egg-laying as late as January. Wildlife officials there plan to keep looking for the animals until then.

As soon as the mother turtle leaves, workers hurry to dig out the eggs. They move them to a one-meter-deep hole in a hatchery until the babies come out of the eggs, about 40 to 45 days later.

The new turtles are taken to the beach immediately and released into the sea.

The Sindh turtle unit has released 860,000 turtle babies into the Arabian Sea since it began operating in 1970. Memon said that 900 have been released so far this season.

Conservationists say that in the past, sea turtle populations were threatened by demand for their fat, meat and eggs. In recent years, loss of habitat from pollution and land reclamation have also threatened the animals.

conservancy - n. an organization that works to protect animals, plants, and natural resources especially by purchasing and caring for areas of land

nest - v. to build or live in a nest (nest - n. the place where a bird lays its eggs and takes care of its young)