Update Required To play the media you will need to either update your browser to a recent version or update your Flash plugin.
By Caty Weaver
28 November, 2013

On the show today, we play music you can find in a special online sales event.

But first, a report on the cute, furry baby at the National Zoo.

A panda born at the National Zoo in Washington will turn 100 days old on December 1. It is an important day for the young animal. Chinese tradition celebrates 100 days of life with a naming ceremony. And zoo officials plan to follow the custom. Kelly Jean Kelly has more about the little panda, the newest addition to the effort to keep and protect the endangered animal.

Only a few visitors are at the National Zoo on a cold, gray day earlier this week. But bright holiday decorations are already in place — some of them feature giant pandas.

One panda has been the center of international attention. She is a little female who still does not have a name.

The cub was born to giant panda Mei Xiang on August 23. More than two million people have watched her grow on broadcasts from the zoo's "panda cam." 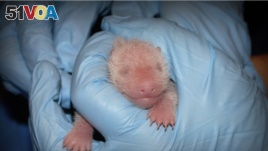 A member of the panda team at the Smithsonian's National Zoo performs the first neonatal exam on panda cub, August 25, 2013,
She was pink, hairless and weighed only 136 grams at first. Now she is covered in black and white fur. She weighs almost 4.7 kilograms and she can crawl.

Brandie Smith is the curator of the Giant Pandas exhibit. She says the cub is helping the public learn the importance of saving these animals.

"Giant pandas are an endangered species and every single additional panda in the world makes a difference."

Ms. Smith says the zoo workers have been trying to get the cub used to their voices. This relationship makes caring for her easier.

"We have a training language with them so that we can interact and we can do the necessary things we do to keep them healthy and safe."

"Eventually, when the cub is about six months old – so about three months from now – she'll start sampling some bamboo, but she'll still be drinking milk until she is about a year and a half, or even closer to two years old."

The Giant Panda is also about to receive her name. Since November 5, more than 100,000 people have voted on the National Zoo website to choose a name. There are five possibilities. Bao Bao means precious or treasure; Ling Hua is darling or delicate flower and Long Yun means dragon and charming and is a sign of good luck.

The other two possibilities are Mulan, after a famed fifth century Chinese warrior and Zhen Bao which means treasure or valuable.

The voting ended November 22. The zoo will hold a special ceremony on December 1 to give the cub her name.

On this morning at the zoo, children from a nearby elementary school are crowding the path to the panda area. One of the students, Calvin, explains why he and his friends voted for the name Mulan.

"You know I liked the name because (she's) a brave woman warrior. I really like the name because out in the wild by itself, it has to brave."
The cub will remain separated from the public until January. At the age of four she will be returned to China to find a mate and start her own family.

Baking for a New Life

Many doors close when an individual is jailed for a crime. It can be difficult for former prisoners to reenter society. A number of training programs are aimed at reopening doors for these men and women. "Together We Bake" teaches cooking and marketing skills to women who have spent time in prison so they can start new lives. Kelly Jean Kelly has more.

"Together We Bake" is a 10-week program. It teaches women how to bake and sell chocolate chip cookies and granola. Two friends, Tricia Sabatini and Stephanie Wright, created the program. Ms. Wright explains how.

"I have a background in social work and she is an amazing baker. We decided to combine forces and we discovered that this population of women, returning from prison or jail into the community, there aren't a lot of resources for them. So we thought we could combine our passions and develop this job as a training program."

Stephanie Wright says they launched the program earlier this year.

"We had two classes so far that have graduated. This is our third class. We have eight women currently in this class. We've 16 women graduated in the first two teams."

Forty-five year old Terry Garredt is one of the graduates.

"I know that I'm able to work with a team and successfully complete a project."

She says the program helped her turn her life around. Next she hopes to complete her high school studies. She is also working for Together We Bake to help other women follow the path she took.

"I see it as empowering because they're focusing on something they can achieve; start with something small, work with it to something big, in five years you should be there."

That makes sense to Regina Byrd who joined Together We Bake just a few weeks ago. The 50-year-old hopes to open her own restaurant someday. She says she could not have even dreamed of such a thing when she got of jail last year.

"It was very hard for me to get a job because I had a felony. I had a very low self-esteem and depression."

The program includes classes in which the women talk about their experiences and learn communication and job skills. Thirty-six-year-old Jamie Whitehead spent three years in jail. She found those meeting were very helpful.

"I learned how to open up a little more because I'm not alone, there are others out there. I made a mistake and moved past it. I'm just trying to better myself."

"Just to enforce that everyone deserves a second chance, that you will never know by looking at someone what they're going through and the power they have to change themselves."

"My family loves the granola. It's so fresh, and we eat it every day with our breakfast."

"We are very community minded and we're so proud of the work that Together We Bake is doing in the community to give women a second chance. We're here mostly to support Together We Bake, that's why we come and buy our granola here."

That kind of support helps the former prisoners know that their work is worth it. They learn that they have what it takes to succeed.

Black Friday for Music Too

In the United States, the day after Thanksgiving is traditionally the start of the shopping period for the holidays in December. On Black Friday, as the day is known, stores open earlier and offer cuts in prices.

Katherine Cole tells us how the organizers of the Record Store Day are joining in this year. Shoppers will be able to buy some very special music without leaving home. 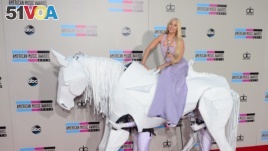 Lady Gaga arrives for the 2013 American Music Awards in Los Angeles, California last Sunday
Nick Lowe's future holiday classic "Christmas at the Airport" can be found on his new release "Quality Street." It is available on CD and digital download. But for the Record Store Day's Black Friday event, it is being made available as a vinyl LP picture disc. Picture discs are records with images printed in the vinyl. Lady Gaga has a picture disc out for the season. It contains remixes of her song "Applause."

A group of independent record stores organize "Record Store Day." It is held each April. The yearly event has added to the surprising popularity of a return to vinyl records. Sales of music CDs have been falling for years. But sales of old-time vinyl records have been growing.

Among the Record Store Day specials for Black Friday are live recordings by the Dave Matthews Band and the Rolling Stones. And there are rare works from the former British band The Clash.

Vanguard Records has two specials. It is releasing tribute albums for famed guitarist John Fahey and for the former poet, songwriter, illustrator and author Shel Silverstein. The tribute to Shel Silverstein includes tracks by Kris Kristofferson, John Prine and the group My Morning Jacket. It performs Silverstein's
"26 Second Song."

Do you have a question about American life, people or places? Send an e-mail to learningenglish@voanews.com. We might answer your question in a future show. You can also visit our website at 51voa.com to find transcripts and audio of our shows.

Join us again next week for music and more on American Mosaic from VOA Learning English.
Related Articles
go top