Volunteers Bring Music to Those in Need

Update Required To play the media you will need to either update your browser to a recent version or update your Flash plugin.
By Caty Weaver
21 November, 2013

On the show today, we play music from newcomer Cassadee Pope.

We also answer a question about the state of Alaska.

But first, we tell about an organization that brings music and hope to those in need.

Americans have been volunteering to make a difference around the world through the Peace Corps for more than 50 years. A community development program for the United States began 20 years ago. Its name is AmeriCorps. And now, another volunteer effort is making a difference in people's lives ... with music. Kelly Jean Kelly has more.

"Music and arts more broadly are underutilized as a strategy for public good and social impact. And musicians and artists specifically, given the proper training and support, can be effective community leaders and be engaged in the civic social impact movement."

Twenty years ago, Kiff Gallagher was a recent college graduate and served on the legislative team of then President Bill Clinton. As part of the team, Mr. Gallagher witnessed the creation of the community service program AmeriCorps. But at night, he performed with a popular Washington, D.C. band.

The young man has enjoyed successful careers in both business and music. Five years ago, he realized that these twin loves - service and music - could be used together to help Americans in need.

"Recognizing that music had been cut from schools and there was more and more data coming out about music as an intervention for veterans and Alzheimer's and autism, I just thought this is a no-brainer, why is there no MusicianCorps?"

So he started one. MusicianCorps seeks out musicians and trains them as teachers and mentors. The artists then provide these services in city schools, children's hospitals, and assisted-living homes for older adults. The musicians also help organize community jams sessions. Anyone can play music at these community activities.

Kiff Gallagher says what makes MusicianCorps different is that it is participatory. It provides a place for people to get involved. He remembers a MusicianCorps event at a hospital for military veterans. Afterwards, he says, the veterans were less depressed, in less pain and more at ease.

"They're making music. They're playing drums, they are playing ukuleles, they are singing. So, it's less about performance or traditional instruction and more about music-making. But again, in a veterans' space, that's not a musical outcome. That is a critical intervention that's addressing one of the biggest problems we face right now in public health and that is veterans' suicide."

That is David Meletiche. He teaches an after-school guitar class in a high-crime neighborhood. Mr. Meletiche holds a Bachelor of Fine Arts degree. He was excited when MusicianCorps sought his skills. The group not only gave him a job in a difficult economy. It gave him the chance to use the team-building skills he gained in college that go beyond his musical training. 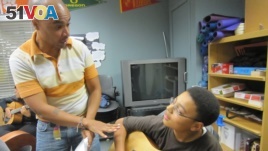 MusicianCorps' David Meletiche works with Rajahn Blevins in his after-school guitar class. (Courtesy MusicianCorps)
"I've been working in the not-for-profit youth development field for a few years, and I've found that this is one of the ones that's most practical. That is to say that we have stated goals and we achieve them."

There are 12 high school students in his class. Each one of them is learning to play on a donated guitar. Rajahn Blevins praises his teacher.

"It's fun because he really teaches you, and if you really love to learn, you'll be really engaged in the guitar class."

"It definitely keeps me off the streets, because without this program I probably would be wandering around right now and I would not know what to do. And it also gives me an opportunity and chance to learn something I've never done before or, actually, attempted to do."

Even with 200 MusicianCorps artists in the program, Kiff Gallagher is still looking for more.

One place is find them is American colleges. Development coordinator Kelly McVey's job is to contact college music clubs, where students are using their talents to improve the lives of others in their community.

"What we do is we put them in touch. We help them share best practices and we also provide a platform - The MC Campus Blog - for students to show what they are doing. We found that there's no other organization that's really providing a network for all of these disparate clubs to get in touch with each other."

Twenty are now under the umbrella of MusicianCorps, and more will be signed up soon.

MusicianCorps has established programs in California and North Carolina. Other programs are under discussion for New York, Maryland and Texas. Founder Kiff Gallagher hopes MusicianCorps will continue to expand across America.

Today we answer a question from a listener in China who asks about the history of America's largest state -- Alaska.

The United States bought Alaska from Russia in 1867 for seven million dollars. That is less than five cents a hectare. At the time, many Americans criticized the purchase. But it was one of the best deals the country ever made. Alaska proved rich in oil and minerals. 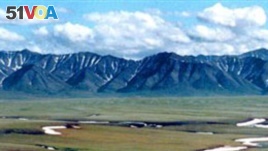 Part of the Arctic National Wildlife Refuge in Alaska.
Gold was found nearby in the Yukon area of Canada in the eighteen nineties. Thousands of people traveled to the Yukon through Alaska hoping to get rich. Most never did. But some of them decided to stay in Alaska. Mainly they earned their money as miners, fishermen, animal trappers and store owners.

Alaska became an official territory of the United States in 1912. Four years later, the first Alaskan statehood bill was proposed in Congress. Opponents argued that Alaska was far away, disconnected from the other states and little populated. Only about 58,000 people lived there at the time.

Yet those were not the only concerns. Historians say Congress was also unsure about the loyalties of native Alaskans -- the Aleuts, Indians and Eskimos. But during World War Two, national leaders recognized the importance of the territory to security in the Pacific.

The United States entered the war in 1941 after Japanese planes attacked the Navy base at Pearl Harbor, Hawaii. The surprise attack sank many ships. After that, Congress provided billions of dollars in defense spending for Alaska. Today, federal spending is one of the most important parts of the state economy.

After the war, Alaskans were more serious than ever about statehood. They formed a Statehood Committee in 1949 to work toward that goal.

Finally, in 1958, Congress passed the Alaska Statehood Bill and President Dwight Eisenhower signed it into law. Alaskans accepted it, and on January third, 1959, President Eisenhower declared Alaska the forty-ninth state.

Today, Alaska has more than 730,000 people. About 25 percent of them are under the age of eighteen.

The biggest industry in Alaska is oil and gas production. But tourism and fishing are also important.

Last year Florida native Cassadee Pope became the first female champion of the television competition show "The Voice." As Mario Ritter reports, the former rock star has settled in to her new career in country music.

"Wasting all These Tears" is the first single released from Cassadee Pope's first album "Frame by Frame." The song entered Billboard magazine's Hot Country Songs chart at number one. 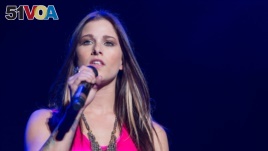 Cassadee Pope performing in Irvine, California last month.
Cassadee Pope spent five years as lead singer of the rock band Hey Monday. She says she is enjoying her new work as a solo artist. But she admits there are times when she misses the Hey Monday band members.

"Being in Hey Monday as opposed to being solo has its differences, but for the most part, it's very similar. I am still creating music with other people. I'm collaborating with songwriters and producers. It's not my band but they are still human beings that I'm collaborating with. I've created really, really great chemistry with my band right now. But I do miss the guys."

Pope changed musical directions from rock to country after appearing on the third season of "The Voice." Country star Blake Shelton was Cassadee Pope's trainer on the reality show. For her final performance on "The Voice," Pope sang "Over You." The song was a 2012 hit for Shelton and his wife Miranda Lambert.

We leave you Cassadee Pope performing "You Hear A Song," from her new album, "Frame by Frame."