Peacemakers, Employers Come Together for Education

Update Required To play the media you will need to either update your browser to a recent version or update your Flash plugin.
By Dr. Jill Robbins
24 November, 2015

Imagine you are a high school student in Lebanon. A new girl in your neighborhood has just arrived from Syria. You don't have classes with her. But after school you see kids calling her names and bullying her.

Now imagine you are that Syrian refugee. Your family just escaped from the Islamic State militants. Since school is crowded, you go to school in the afternoon and Lebanese children go in the morning. They call you "stupid" because you have not studied French. Sometimes you get so angry that you want to fight with them. Your parents say you should make friends. 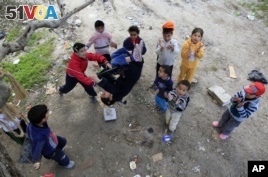 Syrian refugee children, who fled their homes with their families, play on swings, in the southern port city of Sidon, Lebanon. (AP Photo/Mohammed Zaatari, February 2013)

This is the problem many nonprofits and international educators want to solve, including Search for Common Ground. Helping different cultures live, work and learn together is their goal.

Elisa Dari is the country director for Search for Common Ground in Lebanon. She says the Rainbow of Hope project, now in its second year, is giving English lessons to more than 600 children daily in Lebanon after school.

Dari says that, "In Syria, it can become very difficult for the Syrian children to enter a Lebanese school, so there is often a separation between the two."

"But also, outside of school, there is little opportunity for Syrian and Lebanese children to play together, and to be children together, so to speak, so we wanted to provide that space for the children of these communities."

Half the children in the program are Syrian, and the other half are Lebanese. Some are Palestinian. At these classes, Syrian children, ages 6 to 11, meet Lebanese children. On weekends, they play games and have fun. They make friends and learn to accept people who are different.

This video shows children in the Rainbow of Hope program.

Search for Common Ground also has a program for older youth in Lebanon. It is called Better Together.

The program brings young people ages 15–25 together in a summer camp. The youth live together and try different arts for a week. Then they choose to produce a play, a video create music or make a comic book. They explore the arts and learn life skills in workshops. At the end of the camp, they tour their communities to bring their message to a wider audience.

"So [The program is about] the breaking down of stereotypes, learning how to deal with conflict in a constructive manner, and dealing with the tensions, coping with the very difficult environment in which these children live."

Eventually, Dari says, the young people are able to "deal with the conflict and the tensions in a constructive and collaborative manner, rather than with hatred, and stereotypes and adversarial approaches."

In this video a young woman who attended Better Together speaks.

Melanie Greenberg is head of the Alliance for Peacebuilding. She says, "We all have the power to create peace. I feel it is our responsibility as senior peace builders to give students the tools to harness civil society energy and become leaders themselves."

Greenberg adds that students can learn these four "basic building blocks" in order to build peace:

Beyond peace, businesses also want people with cross-cultural skills in a global economy. These include critical thinking, cross-cultural communication and collaboration skills.

For students and others who cannot travel to another country to learn cross-cultural skills, Search for Common Ground organizes online conversations, called "virtual exchanges."

The virtual exchanges are like a video call online. A trained leader guides the conversations of young people from 27 countries. Many come from the U.S. or Western Europe. The others are from Muslim-majority countries like Egypt, Qatar, Yemen, Chad and Indonesia.

Funding from governments and nonprofits will pay for more than 1 million of these virtual exchanges in the next five years.

Shamil Idriss is president of Search for Common Ground. He says it is good that international education is also supported by businesses.

bully – v. to frighten, hurt, or threaten a smaller or weaker person

alliance – n. a union between people, groups, countries, or a relationship in which people agree to work together

harness – v. to use (something) for a particular purpose

cross-cultural – adj. relating to or involving two or more different cultures or countries

stupid - adj. showing a lack of ability to learn and understand things

bit - n. a small piece of something; something small or unimportant

comic - adj. of or relating to humor; causing laughter

constructive - adj. helping to develop or improve something

funding - n. available money; money that is used for a special purpose

Now it's your turn. Have you studied in a different country from your own? How was your experience? Do you think international education helps to build peace? Write to us in the Comments section or on Facebook page.