Death Toll Rises After Landslide at Myanmar Jade Mine


At least 100 bodies have been recovered and 100 are still missing following a landslide near a jade mine in northern Myanmar Saturday.

Rescue workers continued to pull bodies from the landslide on Monday. They recovered 113 bodies when the search was suspended Monday night in Myanmar, also known as Burma. Two of the bodies recovered were women, Reuters said.

One official said he is not sure "how many people exactly were buried since we don't have any data on people living there. The workers were living in tents."

Officials explained a man-made mountain of debris from the mine collapsed at a dump site. The debris buried a settlement near a mine controlled by the Triple One Jade Mining Company. 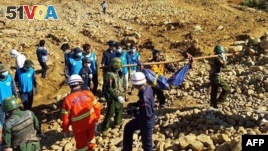 Soldiers carry the bodies of miners killed by a landslide in a jade mining area in Hpakhant, in Myanmar's Kachin state on November 22, 2015.

The military worked with local residents in rescue and recovery missions. Heavy equipment was used.

Ko Sai is a miner at a neighboring camp. He said the landslide hit around 3 a.m., when many miners were sleeping.

The Global New Light of Myanmar newspaper reported the man-made mountain of rubble was 60 meters high. Only five tents were not buried.

The area produces some of the highest quality of jade in the world.

Much of the jade mined in northern Kachin State is believed to be smuggled to China.

The value of jade mined in Myanmar reached close to a value of $31 billion in 2014. But the mining has turned Myanmar's topography into a "wasteland," says environmental group Global Witness.

While Myanmar is known worldwide for its jade mining, 70 percent of the country's 54 million people make their living from agriculture.

dump – n. a place where waste is taken and left

smuggle – v. to move someone or something from one country into another illegally and secretly