Update Required To play the media you will need to either update your browser to a recent version or update your Flash plugin.
By Mario Ritter
23 January, 2018


Sumaya Bairuty is a 38-year-old English teacher who lives in the city of city of Homs, Syria.

Each week, she passes destroyed buildings and huge sand barriers as she goes to visit her parents in a neighborhood once held by rebels.

Bairuty works in Damascus, but spends two days with her parents in Homs each week. They live alone in an apartment that has recently been repaired, but the area is heavily damaged and very few people are left.

Rebels and many civilians withdrew from the central part of the city in May 2014.

Bairuty's brother, Rabih, was killed in the rebel-held province of Idlib in 2015.

She said, "That was the biggest loss. Neither the house nor the work or any other thing was as painful as losing Rabih."

The family home is in the center of the city formerly held by rebels. Cars cannot drive in the neighborhood because the streets remain severely damaged from shelling. The nearest area with stores and clear streets is a 20-minute walk away.

Bairuty said her said her family has lived in eight different places since the beginning of the Syrian conflict seven years ago.

The family fled Homs when rebels first took control of the city. They moved to Damascus, but returned one year later. Since then, they have rented several apartments.

After they moved into their most recent apartment, the United Nations helped them with repairs. The family installed new windows and doors and filled holes in the walls.

Three years ago, Bairuty's younger brother was almost 18. He wanted to move to Turkey to find a job and avoid required military service.

A pigeon keeper watches his pigeons fly from the roof of is home in the war-damaged Bab Dreib neighborhood where Sumaya Bairuty lives the old city, in Homs, Syria.

The family spoke to relatives in a rebel-held village in Idlib who promised to help him move to Turkey.

Bairuty and her mother, Tamador Shilar, said the relatives informed extremists about Rabih. The militants belonged to a group, Jund al-Aqsa, which has been linked to the Islamic State. The relatives told the militants that Rabih was a government supporter.

Within a few days, the young man was placed on trial by members of the group. They sentenced him to death for supporting the government. They also said they wanted to punish his oldest sister, who teaches at a government-run school.

Weeks later, the family received Rabih's identity cards and belongings through a taxi driver who operates between rebel-held Idlib province and Homs. A letter said he was killed because he did not join the "holy war" against the government, Bairuty said.

Shilar grieved that she has lost a son so unfairly. "He was unjustly treated by the dogs," she said.

Bairuty's father said they are lucky to have a home. He noted the family now gets 12 hours of electricity every day and two hours of water service.

He can walk for 30 minutes to reach a market to buy food. 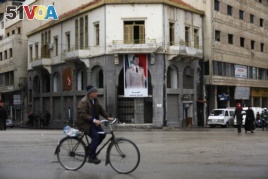 A man rides his bicycle past by a banner showing Syrian President Bashar Assad, at the clock square in the old city of Homs, Syria, Jan. 17, 2018.

Slowly people are returning to Homs

No Western countries have said they are willing to help finance Syria's reconstruction. The government is rebuilding an old marketplace. It also is repairing places of worship such as some of the city's old churches and the famous Khaled bin al-Waleed mosque. However, most neighborhoods are still in ruins.

Homs governor Talal Barazi told the Associated Press about 21,000 families have returned. About 30 percent of the city's population before the war have returned or remain.

Residents are slowly coming back. They use their own money or United Nations assistance to repair their homes enough to be lived in.

Bairuty's father hopes to find work once reconstruction begins. The 70-year-old has been a builder most of his life. But he worries about the lack of transportation in the area.

Shilar is worried that the city will not recover even if it is rebuilt.

"The city needs a lot of effort to be alive again...It is not only the buildings (that are damaged) but also our souls," she said.

Mario Ritter adapted it for VOA Learning English from an Associated Press story. Caty Weaver was the editor.

install – v. to put in place and make ready for use

reconstruction – n. a period of rebuilding