Update Required To play the media you will need to either update your browser to a recent version or update your Flash plugin.
By Carolyn Mohr
15 June, 2016


A recent piece of audience mail expressed concern about the "listening" capability of smart phones.

The writer said she had been planning a funeral and searched on Google for funeral homes. She typed "f-u-n-e-r-a" and Google suggested funeral homes near her as well as other funeral-related websites.

Just then, a friend called her on her landline phone. The friend suggested that the woman make food called "funeral potatoes" for a gathering after the service.

After the call ended, the woman returned to her Internet search. She again typed "f-u-n-e-r-a." This time, the first suggestion to appear on Google was "funeral potatoes."

She called a relative and told him what happened. He thought it was a coincidence. So he experimented.

He typed "f-u-n-e-r-a" into Google. The search suggestions that appeared were funeral, funeral songs, funeral homes near me, and funeral homes.

Then, the man said the words "funeral potatoes" out loud. Then, he re-typed "f-u-n-e-r-a" into Google. Funeral potatoes, funeral and funeral songs appeared.

The woman who wrote about the experience says she and the man had their cell phones in the room with them at the time. It seemed the cell phones had listened to what they were talking about.

Cell phones may indeed be listening to us, even when we are not using them. Stories on the Internet tell of people who got Internet search results or advertisements based on words they said aloud near their cell phones.

When we give an app permission to use our cell phone microphone it is not clear when it is listening to us. There are no signal lights or icons that show when the microphone is turned on.

According to the BBC, Google and Facebook deny using voice data for advertising or other purposes. A Google spokesperson told the BBC that "its listening abilities only extend to activating its voice services."

Facebook also told the BBC it does not permit companies to target advertising based around microphone data. And it said it never shares data without permission.

Voice of America Learning English also experimented with an iPhone and an Android. We did not find that search results or ads change based on spoken information.

Testing whether a phone can listen to you

The BBC asked developers if they could create an app that could activate a phone's microphone secretly and record speech taking place near the phone.

The developers could and did. They told the BBC that the process was "remarkably easy."

This video shows how the developers were successful in creating the app:

Benefits of tech listening to you

Many services on the Internet are free, such as Google, Facebook, YouTube, Twitter, and other sites. But advertising is sold to pay for these free services.

Apps that listen may be able to provide more helpful search results and ads. But you may not want your phone listening to you.

How to stop your phone from listening to you 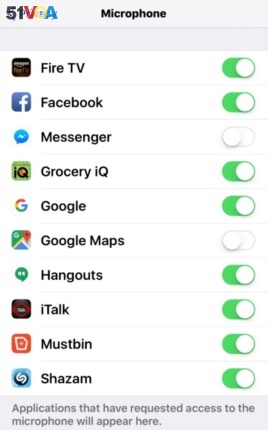 To make sure apps are not listening to you, turn off microphone access on your iPhone. Go to Settings, then Privacy, then Microphone, to see a list of all of the apps that have asked for permission to use your microphone.

Turn off permission for any apps you do not want using your phone's microphone.

Some Android phones let you to see which apps have permission to use your microphone and turn off that permission.

To turn off microphone access, go to Settings, Privacy and Emergency, App permissions, Microphone, to see a list of apps that have permission to use your microphone.

You can also turn the phone's power off or leave the phone in another room to make sure you are not being listened to.

Or you can try a microphone blocking app from the Google Play store. These apps have had mixed reviews.

Do you wish your phone would let you know when the microphone was in use? Have you tested to see whether your phone is listening to you?

funeral - n. a ceremony held for a dead person

permission - n. the right or ability to do something that is given by someone who has the power to decide if it will be allowed or permitted

microphone - n. a device into which people speak or sing in order to record their voices or to make them sound louder

access - n. permission or the right to enter, get near, or make use of something