Update Required To play the media you will need to either update your browser to a recent version or update your Flash plugin.
By VOA
12 February, 2016


Leaders of the Roman Catholic Church and the Russian Orthodox Church have met for the first time in history.

Pope Francis and Patriarch Kirill sat down together Friday in the Cuban capital, Havana. The meeting is part of an effort to heal a 1,000-year-old dispute between the two churches. That is when Eastern and Western Christianity divided.

Cuban President Raul Castro and Cardinal Jaime Ortega, the Vatican's highest representative in Cuba, met Francis as he arrived at the airport. Then, the pope and patriarch greeted each other with hugs and kisses. A short time later, they held a two-hour "personal" discussion. 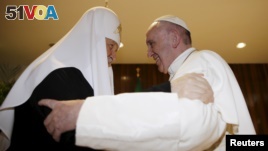 They were expected to unite in an appeal for an end to killing and other violence against Christians in the Middle East.

Officials of both churches announced the meeting between the two religious leaders a week ago. But it had been planned for two years in secret. Kirill arrived in Cuba Thursday for an official visit. Francis stopped there on his way to a five-day visit to Mexico.

Pope Francis was influential in Cuba's decision to re-establish ties with the United States. Now, he is seeking to repair a much longer break in relations.

Eastern Orthodoxy split with Rome in 1054. Today, the Russian church has about 165 million of the world's 250 million Orthodox Christians. The Roman Catholic Church has more than one billion followers.

Russian President Vladimir Putin has supported the Russian Orthodox Church. In exchange, the church has supported Putin's foreign policy, including positions on Ukraine and the Middle East.

Putin has also improved Russian relations with Cuba, which were damaged following the collapse of the Soviet Union in 1991.

heal - v. to make (someone or something) healthy or well again

influential - adj. having the power to cause changes

collapse - n. a situation or occurrence in which something (such as a system or organization) suddenly fails