Update Required To play the media you will need to either update your browser to a recent version or update your Flash plugin.
By Jim Dresbach
09 February, 2016


The government of Zimbabwe is asking for financial help to avoid food shortages in the country.

The government says nearly 2.5 million people in Zimbabwe are facing hunger. That is more than one quarter of the country's population.

The country is currently battling a drought that has affected much of southern Africa. The government blames the drought on El Niño, an extreme weather pattern. 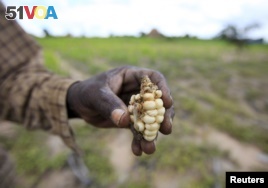 David Phiri is the southern Africa coordinator with the U.N. Food and Agriculture Organization. He said Zimbabwe must invest in irrigation to prevent more food shortages.

"We need to increase the area under irrigation," Phiri said. "Zimbabwe...has the highest number of water points, dams and rivers. There is water in Zimbabwe."

We want to hear from you. Write to us in the Comments Section or visit 51voa.com.

El Niño – n. a flow of unusually warm water along the western coast of South America that causes many changes in weather in other places

conservation – n. the careful use of natural resources to prevent them from being lost or wasted

dormant – adj. not active but able to become active