Update Required To play the media you will need to either update your browser to a recent version or update your Flash plugin.
By VOA
07 February, 2016


Employers are more and more hiring temporary workers, or workers who do not have the same status as permanent, full-time workers.

This practice has been called "freelance nation," "outsourcing," or the rise of "solopreneurs." Solopreneur combines the words "solo" and "entrepreneur" to mean individual entrepreneurs.

These workers are usually paid by the hour. Some are paid one fee for the project, or contract. 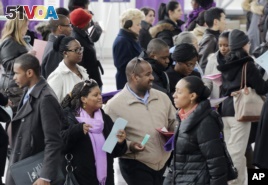 But freelance work may not include benefits such as health insurance, paid vacations, or retirement plans. These are benefits that were typically offered to full-time, permanent employees before the Great Recession of 2007-2009 led to fewer jobs.

The Great Recession resulted in "massive job loss" of 8.4 million U.S. jobs, or 6.1 percent of all payroll employment, said the Economic Policy Institute. It was the most severe job loss since the Great Depression of the 1930s.

After World War II, many employers hired women as temporary workers in clerical jobs. Women filled in for permanent employees who were ill or away on vacation.

But since the Great Recession, use of temporary employees has increased. More employers are hiring temporary workers on a permanent basis and calling them independent contractors. And they are using them for a variety of professional positions.

During the recession, companies fired or laid off employees to offset losses they experienced. As profits declined, they sought to cut expenses. Employees and benefits are the largest portion of a company's expenses. Paying employees benefits like health insurance and pensions create additional costs.

Employers also use independent contractors because they often have the latest skills in technology and other fields. With temporary workers, they can easily increase or decrease the size of their workforce in response to changing market conditions.

Size of gig economy is in dispute

There is disagreement about the size of the gig economy. It depends on how it is measured.

The Economic Policy Institute is a think-tank in Washington, D.C. In 2015, the institute said that about 27 million workers – about 1-in-6 U.S. workers — are unemployed or underemployed.

"Once workers get laid off from a job in this labor market, the odds are stacked strongly against them finding another one anytime soon," reported the study.

The U.S. Department of Labor said benefits for permanent employees are worth 30 percent above an employee's salary. For example, if an employee receives $50,000 a year in salary, it can cost the employer $15,000 in benefits. So that means the total value of the compensation package for the employee is $65,000.

The Great Recession's impact on the labor market

Since the recession ended in 2009, the U.S. economy has not created jobs needed to match population growth and to return workers to the labor force, said the Economic Policy Institute.

More low-wage jobs than high-wage jobs have been created during the past four years. High-wage industries lost 1 million positions, while low-wage jobs increased by 1.8 million in that time period, reported the National Employment Law Project (NELP).

Charlie Jeszeck is director of Education, Workforce and Income Security Issues at the U.S. General Accounting Office (GAO). He and his colleagues wrote studies on the contingent workforce.

"We don't know the size of the gig economy," he said. "There aren't good data on this issue. Also, analysts disagree about who should be included in the concept of the contingent workforce."

Mary Gotschall wrote this story for VOANews. Hai Do and Kathleen Struck were the editors.

Do you have an opinion about this topic? Let us know what you think in the Comments section below, or on 51voa.com.

expectation – n. a belief that something will happen or is likely to happen

insurance – n. an agreement in which a person makes regular payments to a company and the company promises to pay money if the person is injured or dies, or to pay money equal to the value of something (such as a house or car) if it is damaged, lost, or stolen

retirement – n. the period after you have permanently stopped your job or profession

recession – n. a period of time in which there is a decrease in economic activity and many people do not have jobs

consultant – n.  a person who gives professional advice or services to companies for a fee

adjunct – adj. added to a teaching staff for only a short time or in a lower position than other staff

tenure - n. the right to keep a job (especially the job of being a professor at a college or university) for as long as you want to have it