Update Required To play the media you will need to either update your browser to a recent version or update your Flash plugin.
By Jim Dresbach
04 February, 2016


At the beginning of 2016, a new law went into effect in Texas. The law permits a gun owner with a concealed-weapon license to carry a gun openly in public.

The new law is being both supported and protested throughout the state.

Stores, markets and restaurants have the right to ban guns on their property. But some business owners are supporting the new law by offering special deals to people who openly carry their guns. 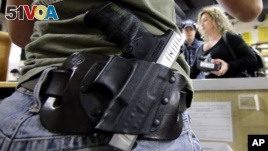 Kayla Brown wears her gun on her hip while working at the Spring Guns and Ammo store in Spring, Texas, January. 4, 2016.

Restaurant owner Trent Brooks believes legal gun owners help prevent crime. He offers a 10 percent reduction in the cost of food to customers who wear guns into to his restaurant.

However, Brooks told VOA news that the new law has led some people to stop eating at his restaurant.

Gun-rights supporters have held meetings around Texas to celebrate the new law. But many gun owners said the new law has resulted in more gun bans on private property. Some businesses have posted legal, written notices to ban guns.

Kroger is one of America's largest groups of food stores. It has over 220 stores in Texas alone. The company has not banned the carrying of handguns in its Texas stores.

A parent named Mandy said she would be uneasy shopping in a store where guns are permitted.

"I would not feel comfortable with my kids being around it [a gun]," she said.

Close to 945,000 Texans have handgun permits and are affected by the new law. In August, openly carrying guns will become permissible at state colleges and universities.

What do you think about the new gun law in Texas? We want to hear from you. Write to us in the Comments Section or visit our 51VOA.COM.

conceal – v. to hide something from sight

comfortable – adv. allowing you to be relaxed: causing no worries, difficulty, or uncertainty