Update Required To play the media you will need to either update your browser to a recent version or update your Flash plugin.
By VOA
06 August 2021


This week on Ask a Teacher, we answer a question from Joelson. He says: 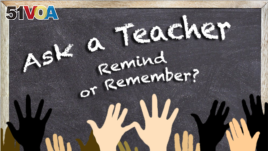 Dear VOA, I am an English learner from Brazil. I want to know the difference between "remind" and "remember." Thank you very much.

Hi Joelson, that is an excellent question.

Verb pairs like borrow/lend, come/go, and remind/remember can be tricky for English learners.

The verbs "remind" and "remember" both involve recalling something. But there is a clear difference in meaning. And they have different sentence structures.

I just remembered I left the water on.

Remember to bring a lock to store your belongings.

In the first example, notice that "remember" is followed by a clause. In the second, it is followed by an infinitive, also known as to + verb. "Remember" can also be followed by a noun that ends in -ing, as in "I remember leaving the water on."

Can you remind him to buy more cat food? We ran out.

When we use "remind" this way, the verb is followed by an object. In this case, the object is "him."

Another way we use "remind" is to say that a similarity causes us to think of someone or something. Listen to an example:

That actor reminds me so much of my brother. They have the same eyes and laugh.

When we use "remind" this way, we always include the word "of."

pair - n. in a group of two people or things

lock - n. a device that keeps something (such as a door, window, or box) from being opened and that is usually opened by using a key

clause - n. a part of a sentence with its own subject and verb

object - n. noun, noun phrase, or pronoun that receives the action of a verb