Report: 25 Percent of US Jobs at Risk of Being Lost to Machines

Update Required To play the media you will need to either update your browser to a recent version or update your Flash plugin.
By Bryan Lynn
30 January, 2019


A new report predicts up to 25 percent of American jobs face a "high risk" of disappearing due to future machine automation.

The report was recently released by the Washington-based Brookings Institution. Researchers identified about 36 million U.S. jobs as having "high exposure" to automation.

Among jobs facing the greatest risk are those in office administration, production, transportation and food preparation, the report says. Jobs in these fields may be replaced with technology driven by machine learning and artificial intelligence.

Mark Muro is a senior fellow at Brookings and the lead writer of the report. He told the Associated Press that people in these jobs will need to react to these changes to survive. "That population is going to need to upskill, reskill or change jobs fast," he said. 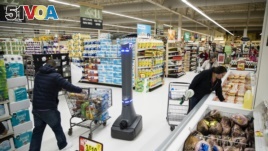 Muro said some of the jobs could disappear quickly -- within a few years. Others could last another 20.

Smaller cities and communities at risk

The report predicts job losses to machines will be greater in smaller cities and communities, especially in parts of the U.S. Midwest.

The highest job risk is expected to be in Indiana and Kentucky. Both states have some communities where nearly half of workers are employed in the manufacturing and transportation industries. Wisconsin, Ohio and Iowa are also expected to suffer large losses.

On the other hand, large cities in the U.S. northeast -- including Washington D.C., Philadelphia, New York and Boston -- will see much lower job losses to machines.

Young people who work in the food services industry and other low-skilled jobs face an especially high risk for automation.

Mark Muro said jobs aimed at assisting the public will increasingly be turned over to robot helpers. "Restaurants will be able to get along with significantly reduced workforces," he said. "In the hotel industry, instead of five people manning a desk to greet people, there's one, and people basically serve themselves."

Underrepresented minority groups are also likely to be affected by machine automation. "Young workers and Hispanics will be especially exposed," the report predicts.

Among the jobs with the lowest risk of being lost to automation are in business, engineering, social services, education and management, the report found.

Some economists believe machine automation has an overall good effect on the labor market. Matias Cortes is an assistant professor at York University in Toronto, Canada. He was not involved in the Brookings report.

Cortes told the AP that automation can create economic growth, reduce prices and increase demand. He also said new jobs can be created to make up for those that disappear.

However, he added that there are likely to be "clear winners and losers." In the recent past, those hardest hit were men with low levels of education who held manufacturing and other blue-collar jobs. Two main groups of women were also affected: those with lower levels of education and those working in administrative positions not requiring high skills.

Bryan Lynn wrote this story for VOA Learning English, based on the Brookings Institution report, the Associated Press and Reuters. Kelly Jean Kelly was the editor.

How do you think machine automation will affect your current job or future career plans? Write to us in the Comments section, and visit 51VOA.COM.

automation – n. the control of something using machines and not people

exposure – n. situation in which someone is affected by something because they are in a particular place or situation