Update Required To play the media you will need to either update your browser to a recent version or update your Flash plugin.
By Ashley Thompson
13 January, 2019


The fight against poverty is getting help from faraway objects: satellites orbiting the Earth.

Satellite images are helping researchers map areas of extreme poverty. Those pictures may help officials quickly identify when development policies and programs are working, and when they are not.

Ending extreme poverty by the year 2030 is the first of the United Nations' 17 Sustainable Development Goals.

Experts usually measure poverty by using official census records and other studies. But population counts are costly, slow and labor intensive. Countries usually organize such studies once every several years.

But satellites can map the Earth's surface with great detail every few days. The imagery is getting better and less costly as a growing number of public and private satellite systems go into service.

Researchers have used the brightness of lights in nighttime images to estimate an area's economic activity. Others have used machine learning to identify richer and poorer villages from satellite imagery.

One new study has taken the most detailed look ever. Within a single village, it attempts to identify the poorest individual households. It was correct 62 percent of the time. 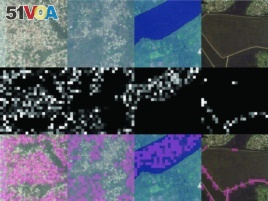 The study involved the village of Sauri, in rural Kenya. Sauri was part of the Millennium Villages Project, a poverty alleviation experiment that was launched in 2005. As part of the project, detailed information was collected on the earnings and valuables of each home in Sauri.

In satellite images of the village, researchers measured the size of each house and studied the agricultural land surrounding it.

Not surprisingly, smaller homes usually housed poorer people. But the researchers also noted other findings. For example, poorer homes often have bare farm fields in September. In rural Kenya, that usually means farmers are preparing their land for a second crop.

Gary Watmough is a geographer at the University of Edinburgh in Scotland and the lead writer of a report on the study. Watmough notes that late-season rains do not always come to this part of Kenya. In fact, they fail to arrive up to half the time.

Watmough added that late-season planting is done by poor people "because it's a necessity."

"They either don't have enough land or they need to have that insurance, just in case something else goes wrong," he said.

Satellite imagery also found poorer households' fields were growing crops for shorter periods of time. They also were not planting their own crops as early as others.

Watmough said, "That was because they were contracting themselves out to plant other, wealthier households' crops first."

The money they earned from such work went toward buying seeds. But that meant their own crops had less time to grow.

The study demonstrates the possibilities "for satellite data to distinguish between the wealth of you and your neighbor," said David Newhouse, an economist with the World Bank. He called such possibilities "scary...but also somewhat exciting."

Newhouse was not involved with the study.

The markers of poverty in Sauri will not be the same everywhere. The methods would need to be changed for other areas.

Experts also say it is not the best idea to use only information from satellite images.

The aid group GiveDirectly used satellite images to target donations to people in villages with a high number of thatched roofs on homes. These villages were considered poorer than those with metal on top.

But people learned what was happening. So some claimed to live in thatched-roof structures next to their metal-roofed homes so they could receive donations.

GiveDirectly has since changed its methods.

Damien Jacques is an expert in remote sensing - the use of satellites or high-flying aircraft to collect information about the Earth. He said there is power in combining satellite data and on-the-ground information.

Jacques said, "Using the two types of data, one that is cheap to collect and very frequently available to complement traditional data that are expensive to collect and not frequent, you can get the best of the two."

It is not known whether changes in poverty can be measured from space. That is something Watmough and other researchers will be investigating. They have survey records from Sauri from 2005 and 2008. The next step is to look for differences in the imagery.

Steve Baragona reported this story for VOA News. Ashley Thompson adapted it for Learning English. George Grow was the editor.

sustainable - adj. involving methods that do not completely use up or destroy natural resources

density - n. the amount of something in a particular space or area

alleviation - n. the process of reducing the pain or trouble of (something) : to make (something) less painful, difficult, or severe

bare - adj. not covered by leaves, grass, trees, or plants

insurance - n. protection from bad things that may happen in the future — usually + against

distinguish - v. to notice or recognize a difference between people or things

thatched - adj. made of dried plant material (such as straw or leaves)

roof - n. the cover or top of a building, vehicle, etc.