Update Required To play the media you will need to either update your browser to a recent version or update your Flash plugin.
By Hai Do
02 January, 2019

The "snowman," named Ultima Thule, orbits an area known as the Kuiper Belt. The area has hundreds of thousands of objects that could hold the keys to understanding the beginning of our solar system.

Jeff Moore leads the New Horizons' geology team. He said the spacecraft "is like a time machine, taking us back to the birth of the solar system."

Early images show that Ultima Thule is about 31 kilometers by 19 kilometers. Alan Stern, the lead investigator for the mission, said, "It's two completely different objects that are now joined together."

Ultima Thule likely formed as a rotating cloud of small, icy objects started to combine. Over time, two larger objects remained and slowly joined together in what scientists called "contact binary." The mission team named the larger object "Ultima" and the smaller one "Thule."

In the early hours of January 1, the New Horizons spacecraft flew by Ultima Thule. The fly-by took place at 05:33 UTC. But the signal to confirm the spacecraft's location did not reach Earth until 10 hours later.

When New Horizons left Earth in 2006, scientists did not even know about Ultima Thule's existence. 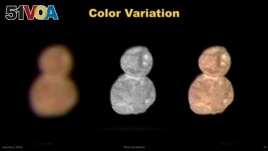 He said, "In addition to being the first to explore Pluto, today New Horizons flew by the most distant object ever visited by a spacecraft and became the first to directly explore an object that holds remnants from the birth of our solar system."

The spacecraft will continue sending images and other data over the next 20 months. The New Horizons team is already pushing for another flyby in the 2020s while the spacecraft systems are still working.

binary - adj. relating to or consisting of two things or parts

location - n. a place or position