US Carbon Emissions Rise in 2018 Because of Industry, Fuel Demand

Update Required To play the media you will need to either update your browser to a recent version or update your Flash plugin.
By George Grow
13 January, 2019


After falling for three years, carbon emissions in the United States rose in 2018.

That information is based on early estimates from an independent research group.

The Rhodium Group studies U.S. emissions of carbon dioxide, a gas linked to rising temperatures in Earth's atmosphere. Its new report estimates that the country's carbon emissions increased 3.4 percent last year. This would be the largest yearly increase since 2010, when the nation was recovering from a financial crisis known as Great Recession. 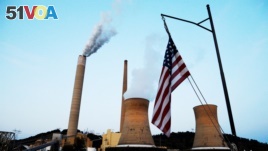 The American flag flies on a towboat as it passes Mitchell Power Plant, a coal-fired power plant, on the Ohio River in Moundsville, West Virginia, U.S., Sept. 10, 2017.

The research also suggests that the American coal industry continues to struggle because of low-cost, plentiful natural gas.

The Rhodium Group reports that coal-fired power stations that produced a total of 11.2 gigawatts of power had closed by last October. Even more were expected to have closed over the following months. If confirmed, that would make 2018 the biggest coal plant closure year on record.

Natural gas is now by far the energy of choice in the United States. The report credited gas for an increase of 166 million kilowatts an hour through October.

American power consumption - and carbon emissions - increased in 2018. The transportation industry was largely responsible for the nation's record emissions.

Demand for gasoline -- the fuel used in most motor vehicles -- decreased. But increases in the demand for other fuel, such as diesel and jet fuel, made transportation the industry most responsible for U.S. carbon emissions.

The report said another big producer of carbon emissions is the construction industry. Emissions from buildings and homes also were up last year, partly because of very cold winter weather in parts of the country.

The Reuters news agency reported last week that the U.S. Environmental Protection Agency did not answer its questions about the report.

Trump administration officials have said that carbon emissions can change from year to year because of economic conditions. They said the country could both cut emissions and enjoy a strong economy at the same time.

Environmentalists say the Trump administration needs to speed up development of renewable energy, manufacturing power from wind and the sun's energy.

The country's carbon emissions had been decreasing year by year since 2015, as the nation worked to honor the Paris Agreement on climate change. But even with those reductions, the United States was unable to meet reductions agreed to by the administration of former President Barack Obama.

Officials from almost 200 countries gathered at United Nations' headquarters in 2016 to sign the climate agreement. Under the deal, the United States promised to cut its carbon emissions by at least 26 percent from 2005 levels by the year 2025.

But in June 2017, President Donald Trump announced his decision to withdraw from the deal. The U.S. will officially withdraw in 2020.

emission – n. the act of producing and releasing something, such as gas or radiation

jet – adj. related to or involving a fuel used to power airplanes

consumption – n. the process or act of using something