Only the Best Are on the 'Cutting Edge'

Update Required To play the media you will need to either update your browser to a recent version or update your Flash plugin.
By Anna Matteo
12 January, 2019

For today's program, we go into the kitchen!

There is a good chance you do not go one day without using a knife. It is an important tool when cooking, and without it, you could not make many dishes.

This brings to mind a story – a true story. 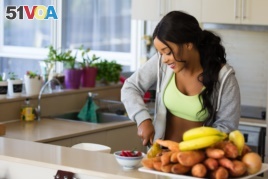 Cutting vegetables is often a part of making meals.

Years ago, a friend and I were making dinner together at my place. She had the job of cutting up vegetables for soup. Halfway through cutting the onions, she said that my knife was not sharp and would not cut. I was surprised. I had given her my best knife. But when I looked over at her, I had to smile. Actually, I did more than smile. I laughed out loud. "It might work better if you use the cutting edge of the knife," I joked.

Let's just say, my friend did not spend a lot of time in the kitchen. She ate out a lot!

In this example, the cutting edge is the sharp edge of a knife. But we also use it to mean something much more.

The cutting edge is the newest and most modern part of any industry. Ideas, tools, technology -- whatever you use in your job -- can all be cutting-edge.

Whatever business or industry you work in, it feels good to be a leader in it. When you know the newest tools or ideas to do your job, you can say you are "on the cutting edge" or that you are simply "cutting-edge."

For example, teachers on the cutting edge of education use the latest technology and ideas in the classroom. Cutting-edge architects know the latest materials, tools and designs to use in the structures they build. Some of the best doctors use cutting-edge technology to treat diseases.

All industries have their own cutting edge.

We have other words to help describe this idea of "cutting edge."

For example, people who on the cutting edge of their industry are on the forefront or front line. They are the vanguard. The vanguard is the group of people who are the leaders of a movement in society, politics or in a given industry.

This expression comes from a military term. In battle, the vanguard are the soldiers, other personnel or equipment that are at the front of a fighting force.

People on the cutting edge, or in the vanguard, are blazing a trail. When you blaze a trail in the woods, you make a trail for others to follow. You do this by cutting down plants that may be in your way. You can also mark trees with a cut, also called a blaze.

Blazing a trail is a difficult job. But it makes it much easier for people walking behind you.

The same can be said for life.

Trail-blazers, people on the cutting edge or in the vanguard are not satisfied with the status quo -- the way things have always been done. They are always looking for a new, better or faster way to do something.

So people on the cutting edge use the latest tools and ideas to be on the forefront of their field. They are the vanguard and blaze trails for others to follow.

We could say that people who use our website are on the cutting edge of learning English -- well, until science makes a magical solution that gives you language ability overnight.

Now, that would be very cutting edge.

And that's all for this Words and Their Stories! Until next time ... I'm Anna Matteo.

And I saw a panther in the yard

Moving slow across the ledge

With silver eyes and a cool regard

And hunger with a cutting edge

Anna Matteo wrote this story for VOA Learning English. George Grow was the editor. At the end of the program, Jennifer Warnes sings The Panther.

dish – n. food made in a particular way

soup – n. a liquid food especially with a meat, fish, or vegetable stock as a base and often containing pieces of solid food

architect – n. a person who designs buildings and advises in their construction

blaze – v. to make and mark a trail by clearing plants and making noticeable cuts in trees : to lead in some direction or activity

prepositional phrase – n. a phrase that begins with a preposition and ends in a noun, pronoun, or noun phrase