Update Required To play the media you will need to either update your browser to a recent version or update your Flash plugin.
By Hai Do
26 November, 2018

Many people mix up the meaning of misinformation with the word disinformation. They sometimes use one term in place of the other.

So what's the difference?

Officials at Dictionary.com say it comes down to what the writer or speaker actually means. They say that "when people spread misinformation, they often believe the information they are sharing." But disinformation is often shared with the goal of misleading others. For example, if people share information that they know to be false in a story or a picture, that is disinformation. 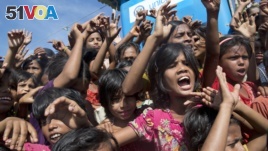 Jane Solomon is a language expert with Dictionary.com. She told VOA that the choice of misinformation, instead of disinformation, was done for a reason. She said, "disinformation is a word that looks outside of ourselves. You can point a finger at someone who is spreading this disinformation."

As for misinformation, "there is a quality of looking inward and it helps us evaluate our own behavior" to fight against the spread of misinformation.

The word misinformation has been used since the late 1500s. But Solomon said the word was chosen this year because it also "ties to a lot of events that are happening in 2018."

In Myanmar, misinformation, like hate speech and propaganda, fueled violence against Rohingya Muslims. And there were riots in Sri Lanka after stories that proved false set the country's Buddhist majority against Muslims.

The disappearance and reported killing of Saudi writer Jamal Khashoggi fueled misinformation about him and his fiancée. And stories about Brazil's recent presidential election were filled with misinformation, everything from incorrect voting times to false campaign promises.

Facebook and other social media websites have published misinformation, including images of police arresting immigrants and long lines at voting stations in the United States. They also posted incorrect voting hours and false voting requirements before the November 6 elections.

Liz McMillan is head of Dictionary.com. She noted that the online publisher has chosen words like identity in 2015, xenophobia in 2016, and complicit in 2017.

She said, "By arming our users with these words and enabling them to identify misinformation when it is encountered gives us a fighting chance against its influence."

regardless of - phrase. without being stopped or affected

biased - adj. showing unfair tendency to believe that some people, ideas ... are better than others

manipulate - v. to deal with or control someone or something

narrative - n. a story that is told or written

evaluate - v. to judge the value or condition of someone or something

fiancée - n. a woman that a man is engaged to be married to