Update Required To play the media you will need to either update your browser to a recent version or update your Flash plugin.
By Anna Matteo
24 November, 2018

On this show, we explore the world of American English. We talk about common expressions, where they come from and, most importantly, how to use them.

Today we talk about behavior and self-control. There are ways of behaving that almost everyone considers normal or comes to expect.

Children learn very early that some behaviors are more accepted than others. They learn how to control themselves and how to behave in certain situations. This learning continues into adulthood.

Well, for most people it does. Not everyone behaves how they are expected to.

So today, we talk about loose cannons!

A good word to describe a loose cannon is unpredictable. You never know how an unpredictable person will act in any given situation.

But not all unpredictable people are loose cannons.

Some people often change their minds about things. Or they surprise you by doing something they do not usually do, or that is out of character. We could describe such people as changeable, uncertain or -- here's a good word -- fickle.

But I would not describe a loose cannon as fickle. Fickle people can be annoying but they are not usually dangerous.

Loose cannons, on the other hand, are often unpredictable in violent ways. So, they can be very dangerous! A good word to describe a loose cannon is volatile, or likely to explode!

So where did the expression "loose cannon" come from?

By definition, a cannon is a large gun that shoots heavy metal or stone balls. Because of their weight, cannons have to be firmly tied down. 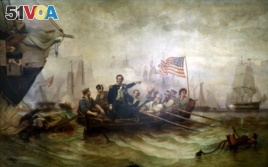 This 1865 painting "Perry's Victory on Lake Erie" artist William Henry Powell shows the moment when Captain Perry made his way from the destroyed battleship Lawrence to the Niagara.

Hundreds of years ago, cannons were often found on battleships. Sometimes a battle at sea with another warship or a storm would free them from their mounting. As you can imagine, a loose cannon rolling around could do serious damage to a ship and her crew.

We can say the same about a person who is a "loose cannon."

Loose cannons, both the guns and people, are difficult to control. Their unpredictable behavior can cause problems for them and others. Family, friends, coworkers or larger groups, such as a sports team or political party can all be affected by a loose cannon.

You are not sure how loose cannons will react to something. They could get angry, losing their temper at the smallest thing.

Now, let's hear how these words and expressions can be used.

Okay. So, local officials are meeting tomorrow night to decide whether or not our neighborhood gets a new school. We need to bring some people who can speak about this issue.

Let's ask D.J. from across the street. He works at a school.

No way! He's a loose cannon! One minute he seems fine, but the next he is shouting and hitting the table.

Hmm. What about Helen?

Helen! She's more unpredictable and volatile than D.J. One wrong word and she could explode. They are both loose cannons.

Well, can you think of any other people? How about Matthew?

No. The city council banned him from attending any meetings for one year.

Yes. At the last meeting he completely lost his temper and actually hit someone!

Wow! I'm feeling our neighbors are a collection of loose cannons.

Maybe ... let's not tell them about the meeting. They will do more harm than good!

She is dangerous. She has such little self-control.

And that is Words and Their Stories for this week. I'm Anna Matteo.

Is there someone in your life who is a volatile loose cannon? Let us know in the Comments Section.

You know she's coming. She is a loose cannon. All you can do is run. Loose cannon ...

Anna Matteo wrote this story for VOA Learning English. George Grow was the editor. The song at the end is "Loose Cannons" sung by Jennings.

out of character – phrase not in keeping with someone's usual pattern of behavior : character – n. the way someone thinks, feels, and behaves : someone's personality

uncertain – adj. not sure : having some doubt about something

volatile – adj. characterized by or subject to rapid or unexpected change

mounting – n. something on which something else is or can be attached

temper – n. heat of mind or emotion : proneness to anger