Update Required To play the media you will need to either update your browser to a recent version or update your Flash plugin.
By Caty Weaver
31 October, 2017


There appears to be something fishy about the story of two sailors who say they were lost at sea for five months.

A U.S. Navy ship rescued Jennifer Appel and Tasha Fuiava Friday in the Pacific Ocean and they landed in Japan Monday. They and their two dogs had left Hawaii May 1 on their sailboat, the Sea Nymph.

They said their boat was severely damaged in storms and they were floating aimlessly for months. 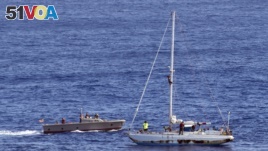 In this Oct. 25, 2017 photo, sailors from the USS Ashland approach a sailboat with two Honolulu women and their dogs aboard as they are rescued after being lost at sea for several months while trying to sail from Hawaii to Tahiti.

However, a U.S. Coast Guard examination has found that the women never used their emergency beacon. Weather experts also say there were no storms as described by the women.

The women earlier told The Associated Press that they had radios, satellite phones, GPS and other emergency gear. However, they did not say they had an emergency position indicating radio beacon. The device communicates with satellites. It sends position information to officials in minutes.

Appel said Tuesday that they had the device on their sailboat but never turned it on. She added that in her experience, the beacon should be used only when facing physical danger and death in the next 24 hours.

"Our hull was solid, we were floating, we had food, we had water, and we had limited maneuverable capacity," Appel said in Japan. "All those things did not say we are going to die. All that said it's going to take us a whole lot longer to get where we're going."

Experts are questioning the truth of other main elements of the women's story. It is not consistent with weather reports or basic geography of the Pacific Ocean.

The pair said they faced a fierce storm on May 3 off the Hawaiian island of Oahu with 97 kilometer an hour winds and 9-meter high waves. But the National Weather Service in Honolulu said no organized storm systems were in or near Hawaii that day or near that day. NASA satellite images confirm that finding.

Appel said they received a Coast Guard storm warning May 3. And she expressed surprise Tuesday that there was no record of the storm.

The women said they thought about turning back, but the islands of Maui and Lanai did not have harbors deep enough for their sailboat.

The Sea Nymph is 15 meters long. Both islands have harbors that can accept boats of that size. But Appel said she had made changes that increased the size of her sailboat.

Several days later, Appel said, parts of their mast and rigging failed but their motor still worked. The two decided against trying to land on another small island. They believed it was mostly unpeopled with no protected waters.

But Christmas Island, part of the island nation of Kiribati, is home to more than 2,000 people. It also has a port that welcomes huge ships.

The pair then set sail for the Cook Islands, about 1,600 kilometers away and a few hundred kilometers beyond their original target destination of Tahiti.

Then, they said another storm killed their engine at the end of May.

At one point in June, the Coast Guard said it made radio contact with a vessel identifying itself as the Sea Nymph near Tahiti. The Coast Guard reported the captain said they were not in distress and expected to make land the next morning. It is not clear if that communication was from Appel and Fuiava, who told the Coast Guard they were more than 2,000 kilometers away, near Christmas Island.

The Associated Press reported this story. Caty Weaver adapted it for Learning English. Hai Do was the editor.

maneuverable – adj. able to be moved quickly, easily, or in small spaces

consistent – adj. in agreement with something

harbor – n. a part of the ocean, a lake, etc., that is next to land and that is protected and deep enough to provide safety for ships

original – adj. happening or existing first or at the beginning