Researchers Use Brain Cells to Control Aging in Mice

Update Required To play the media you will need to either update your browser to a recent version or update your Flash plugin.
By Anne Ball
27 August, 2017


It is a question people have been asking for—well-- ages. Is there a way to turn back the aging process?

For centuries, people have been looking for a "fountain of youth." The idea is that if you find a magical fountain, and drink from its waters, you will not age.

Spanish explorer Juan Ponce de León searched for waters with magical powers in the early 1500s. But what he found instead is the American state of Florida.

Researchers in New York did not find an actual fountain of youth, but they may have found a way to turn back the aging process. It appears the answer may be hidden right between your eyes, in an area called the hypothalamus. 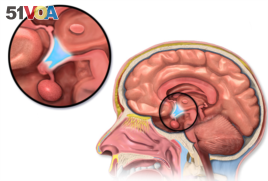 The hypothalamus, the blue section circled above, is part of the brain. It controls activities like growth, reproduction and the way we process food.

The hypothalamus is part of your brain. It controls important activities within the body. They include growth, reproduction and the way we process food.

What are stem cells? They are simple cells that can develop into specialized cells, like blood or skin cells. Stem cells can also repair damaged tissues and organs.

Dongsheng Cai is a professor at the Albert Einstein College of Medicine. He was the lead researcher in a study on aging in mice. He and his team reported their findings in the journal Nature.

Cai explains what they found.

He adds that when the hypothalamus starts aging, so does the body.

"So when hypothalamus function is in decline, particularly the loss of hypothalamus stem cells, and this protection against the aging development is lost, it eventually leads to aging."

Using this information, the researchers began trying to activate, or energize, the hypothalamus in laboratory mice. They did this by injecting the animals with stem cells.

Later, the researchers examined tissues and tested for changes in behavior. They looked for changes in the strength and coordination of the animals' muscles. They also studied the social behavior and cognitive ability of the mice.

The researchers say the results show that the treatment slowed aging in the animals.

"When we injected the hypothalamus stem cells, which were derived from young mice, we injected them to the middle-aged mice and that was, in fact, to slow down aging. So the mouse aged slowly and they also have increased their lifespan, which is longevity."

But these results were just from studying mice in a laboratory. If the mice can live longer, does that mean people could have longer lives? The next step is to see if the anti-aging effects also work in human beings.

"If we can translate what we have seen in animals to humans, I think humans, they can function better during later ages, later stage of aging."

Cai and his team say their studies may have other benefits. They say the findings could lead to new ways to help doctors identify and treat any number of age-related health issues.

fountain – n. a device or structure that sends a stream of water into the air in a garden, park, etc

neural – adj. of, relating to, or involving a nerve or the nervous system

function – n. the job or duty of a person

coordination – n. the process of organizing people or groups so that they work together properly and well

cognitive – adj. of, relating to, or involving conscious mental activities (such as thinking, understanding, learning, and remembering)