Update Required To play the media you will need to either update your browser to a recent version or update your Flash plugin.
By Alice Bryant
30 March, 2018


Russia ordered new cuts Friday to the number of British diplomats in the country. The move has worsened the clash between Russia and several European countries and the United States over the poisoning of a former Russian spy in Britain.

On Thursday, Russia's Foreign Ministry announced the removal of 60 American diplomats, in answer to the United States' expulsion of the same number of Russian diplomats earlier this week.

The increased removal of diplomats on both sides has reached a level unseen even during the height of the Cold War. 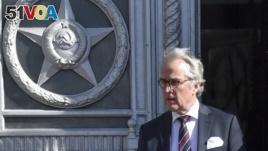 German Ambassador to Russia Rudiger Von Fritsch leaves the Russian foreign ministry building in Moscow, Russia, Friday, March 30, 2018. The Russian Foreign Ministry says it is summoning ambassadors from the countries that expelled Russian diplomats over the poisoning of an ex-spy in Britain, to serve them notices about Moscow's response. (AP Photo/Pavel Golovkin)

More than 20 countries and NATO have ordered the expulsion of over 150 Russian diplomats. The actions were meant as a show of support for Britain over the March 4 poisoning of former Russian spy Sergei Skripal and his daughter, Yulia, in the British city of Salisbury. Britain blamed the poisoning attack on Russia.

Russia has strongly denied involvement in the poisoning. It also announced it would expel the same number of diplomats from each nation.

Russia's Foreign Ministry intensified the dispute Friday, saying it has ordered Britain to reduce its diplomats in Moscow to the number that Russia now has in London. The ministry has given Britain one month to take action.

In answer, a representative of the British Foreign Office said Russia's move was "regrettable" but expected, based on its earlier actions.

A hospital treating the Skripals said Thursday that the daughter's condition was improving quickly. Her father, however, remains in critical condition.

He also said Russia has called a meeting with the Organisation for the Prohibition of Chemical Weapons next week to push for an "objective investigation."

Russia has accused Britain of failing to support its claims with evidence and refusing to share materials from its investigation. The Russian Foreign Ministry said it told the British ambassador on Friday that Moscow is ready to cooperate in the investigation.

critical – adj. relating to or involving a great danger of death

prohibition – n. relating to or involving a great danger of death

objective – adj. based on facts rather than feelings or opinions