Update Required To play the media you will need to either update your browser to a recent version or update your Flash plugin.
By Bryan Lynn
07 April, 2019


Scientists say two rare water frogs had a long-awaited first "date" and showed signs of mating, which could help save the species.

The two are critically endangered Sehuencas water frogs, native to Bolivia. The male, named Romeo, was considered the last known living member of the species when he was collected from the wild 11 years ago.

But that changed in January, when researchers announced that five additional Sehuencas water frogs had been found. That discovery was made by researchers from Global Wildlife Conservation and Bolivia's Alcide d'Orbigny Natural History Museum.

The find came after the team increased its search activities in an urgent effort to find a mate for Romeo. 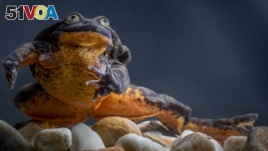 Bolivia has a large number of amphibian species. But Global Wildlife Conservation reports that 22 percent of them - including 10 of 14 kinds of water frogs - face serious threats of disappearing from the planet. Experts blame several causes for the decrease in numbers, including destruction of habitat, the introduction of non-native species, climate change and a deadly disease called chytridiomycosis.

Among the five newly discovered frogs were three females, one of which was identified as a possible ideal partner for Romeo. Scientists named her Juliet.

After months of observation at the natural history museum, officials confirmed that Juliet was free of disease. Then, on March 1, she and Romeo were put into a tank that was new to both of them. After more observation, museum officials decided to move Juliet into Romeo's former tank. They believed the move would improve conditions for mating.

Teresa Camacho Badani works with amphibians at the museum. She said in a statement that officials believed it was important to begin the mating process right away. "When the fate of an entire species is on the line, there's really no time for taking it slow before committing to moving in together."

She added, "Romeo has been really sweet to Juliet." For example, the male frog has been following her around the tank and sacrificing some of his food to her, Badani said. "After he's been alone for so long, it's wonderful to see him with a mate finally."

Museum officials say one of the first hopeful signs was a change in Romeo's calling behavior. He had not been heard making calling sounds since the end of 2017. But he started making the noises again shortly after the pair got moved into Romeo's tank.

Since meeting Juliet, Romeo has also been doing something that experts say has never been seen before in this species group. Romeo has been observed quickly moving the toes on his back feet when he's near Juliet. The experts say this species-specific performance is likely an attempt by the male to impress the female.

Although there are signs that Romeo is interested in mating, Badani says he still has some things to learn. The museum reports that so far, he has gotten himself in the correct mating position only a few times for a few minutes.

The mating process involves the male frog holding the female in a certain way, long enough to fertilize her eggs. Generally, mating can only be successful when both frogs stay in position for weeks, or even months. But wildlife experts admit they know very little about the reproductive behavior of this species.

Chris Jordan is head of Global Wildlife Conservation's operations in Central America and the Tropical Andes. He said in a statement that it is not known how long the mating process would last for Sehuencas frogs. His team is also not sure how long the eggs would take to develop or how many might be produced.

"For now we're keeping them together, and observing them," he said. "Which as simple as it sounds, is already revealing previously unknown behaviors and answering natural history questions about this relatively unknown species."

Jordan added that the experiment was another example of "how little we know about a lot of the species with which we share this planet."

Bryan Lynn wrote this story for VOA Learning English, based on reports from the Global Wildlife Conservation organization. Ashley Thompson was the editor.

amphibian – n. type of animal that lives both on land and in water

fate – n. the things that will happen to a person

commit – v. make a firm decision to do something

impress – v. make someone admire of respect you

certain – adj. completely sure about something

fertilize – v. to cause an egg to start to develop into a young animal or baby by combining it with a male cell

reveal – v. to make (something) known