Update Required To play the media you will need to either update your browser to a recent version or update your Flash plugin.
By George Grow
06 February, 2019


Historically, sailors called out the words "Thar she blows!" whenever they saw whales.

Today, the old cry of sailors is taking on new meaning as scientists turn to modern technology to study whales.

Some scientists have begun using drone aircraft, also known as unmanned aerial vehicles, to collect some of the fluids expelled by whales. 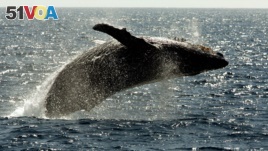 FILE - A humpback whale jumps out of the water off the coast of Lahaina on the island of Maui in Hawaii. Researchers with Macquarie University used a drone to collect whale mucus from humpback whales at sea.

Vanessa Pirotta is a researcher with Macquarie University in Sydney, Australia. She told the Reuters news agency that a drone has been used for the first time to collect whale mucus from humpback whales at sea. She believes that drones could help improve scientists' understanding of whales around the world.

"We're collecting...that visible plume of spray rising from the whale's blowhole, as they come to the surface to breathe," she said.

The method, she added, could provide a better understanding of the patterns and drivers of disease in wild populations.

Pirotta was one of the writers of a paper on the use of drones to study whales. The paper appeared in the online publication, Viruses.

She and other scientists reported that they collected whale blow from 19 humpbacks during 2017. At the time, the whales were traveling northward from Antarctica to northern Australia.

The report said the spray is collected in a small container connected to the top of a drone. The person operating the drone opens the container just as the aircraft flies above the whale.

Pirotta described the new method as less invasive than using a boat to get close enough to collect fluids. And it is better than methods that depend on killing whales or on whales that are trapped. The whale spray collected by a drone contains DNA, the carrier of genetic information, proteins and different kinds of bacteria.

Pirotta said her team can collect bacteria that lives in a whale's lungs to measure whale health.

In this way, drones serve as an early-warning system of possible changes in whales' health.

An international ban on whaling took effect in 1986. But Japan announced last year that it would restart commercial whaling this July in its waters and restricted economic area.

mucus – n. a wet, sticky liquid produced inside the nose and other body parts

spray – n. liquid that is forced or blown through the air