Update Required To play the media you will need to either update your browser to a recent version or update your Flash plugin.
By George Grow
08 October, 2019


Three scientists have won the Nobel Prize in Physics for their work in helping to understand "the evolution of the universe and the Earth's place in the cosmos."

The Royal Swedish Academy of Sciences announced the winners Tuesday.

Half of the $918,000 in prize money will go to Canadian-born James Peebles, a retired professor at Princeton University in the United States. The Nobel Committee on Physics praised his theoretical discoveries in cosmology – the science of the beginnings and development of the universe.

The other half of the award will go to Michael Mayor and Didier Queloz, both of the University of Geneva in Switzerland. In 1995, the two men announced the first discovery of an exoplanet — a planet outside our solar system — that orbits a sun-like star.

Queloz also works at the University of Cambridge in England.

Ulf Danielsson of the Royal Swedish Academy of Science spoke to reporters as the winners were announced.

"This year's Nobel laureates in physics have painted a picture of the universe far stranger and more wonderful than we ever could have imagined," he said.

Scientists have praised Peebles as one of the most influential cosmologists of his time. They say he recognized the importance of the cosmic radiation background that was left over from a huge explosion billions of years ago. Scientists call the explosion "the Big Bang." 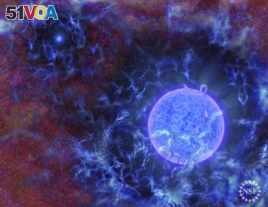 This image provided by the National Science Foundation shows a rendering of how the first stars in the universe might have looked.

The Nobel committee said Peebles' theories about the cosmos led to "the foundation of our modern understanding of the universe's history, from the Big Bang to the present day."

Peebles laughed repeatedly when he spoke by telephone with The Associated Press. He talked about answering the phone before sunrise and thinking that "it's either something very wonderful or it's something horrible."

Mayor and Queloz were credited for having "started a revolution in astronomy" with the discovery of exoplanet 51 Pegasi B. The gaseous ball is comparable to the planet Jupiter.

Mayor noted that in 1995, "no one knew whether exoplanets existed or not."

The committee said more than 4,000 exoplanets have been found in our own Milky Way galaxy since then.

Queloz was meeting with other scientists interested in finding new planets when the press office at Cambridge University told him the big news: He had won the Nobel Prize.

He thought it was joke at first.

"I could barely breathe," Queloz told the AP. "It's enormous. It's beyond usual emotions. My hand was shaking for a long time."

Swedish academy member Mats Larsson said this year's award was "one of the easiest physics prizes for a long time to explain."

The three men will be recognized at ceremonies in Stockholm on December 10, the anniversary of the death of prize founder Alfred Nobel in 1896.

The Associated Press reported this story. George Grow adapted it for VOA Learning English. Ashley Thompson was the editor.

evolution – n. the process by which different things are thought to have developed

cosmos – n. the universe considered as a whole

background – n. the situation taking place at a particular time or underlying an event

galaxy - n. the very large groups of stars and related matter that are found throughout the universe