Update Required To play the media you will need to either update your browser to a recent version or update your Flash plugin.
By Jonathan Evans
20 June, 2019


The piping plover is already one of the most endangered birds in the Great Lakes area of the northern United States. Now, the rising water levels of Lake Michigan further threaten the birds and the areas where they live.

Pools of water are forming behind several plover nests along Sleeping Bear Dunes National Lakeshore in the state of Michigan. The waters of Lake Michigan are now only a few meters from the plovers' nesting area.

Their home could be one storm away from destruction.

Water levels on the Great Lakes are reaching some of their highest points since the U.S. Army Corps of Engineers began keeping records 101 years ago. Streets, businesses and houses in the area have flooded, the Associated Press (AP) reports.

Many sandy areas near the water are getting smaller, while others are underwater.

The birds are forced to move closer to places with trees and bushes, or even to urban areas. 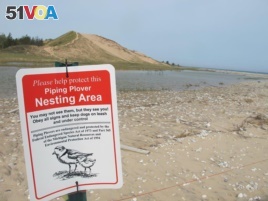 In this May 30, 2019 photo, a sign warns visitors of a piping plover nesting area in Glen Haven, Mich. (AP Photo/John Flesher)

Vince Cavalieri works with the U.S. Fish and Wildlife Service. He told the AP that the high water levels put plovers in more danger than most other bird groups. That is because the areas where they live have been disappearing. He added that some nests on the Canadian side of the Great Lakes also have been swept away.

The Great Lakes generally rise with the melting snow and rainstorms of spring, and fall during the drier Summer months.

However, some scientists believe climate change is causing more changes in water levels.

If that is true, the piping plovers could be at greater risk. Their numbers already have dropped because of shoreline development. The federal government lists the birds as threatened in the northern Great Plains and along the Atlantic coast. Rising sea levels there threaten their wintering grounds. But the Great Lakes population is endangered, hitting a low of just 12 breeding pairs in 1990.

Recovery projects are helping, however. In 2017, officials counted 76 breeding pairs of plovers. Last year, they counted 67. Cavalieri of the fish and wildlife service expects to see similar numbers this year.

Most of this year's plover eggs will hatch by the end of June. If more storms do not wash away nests, a new group of plovers may survive.

Sleeping Bear Dunes is home to nearly half of the Great Lakes plovers during spring and summer. Officials place rope and signs around breeding areas to keep people away from them. Structures are placed on top of the nests to keep out predatory animals, like foxes or coyotes. But officials leave enough space between the wires of the structure for the plovers to enter and exit.

Erica Adams is a plover expert with the National Park Service. She said unleashed dogs are the biggest problem for the birds. Dogs sometimes scare the birds so badly that they leave their nests.

Professionals and volunteers often serve as security guards for the plovers. They can also perform emergency rescues if flooding threatens the birds.

John Flesher reported this story for the Associated Press. Jonathan Evans adapted it for Learning English. Mario Ritter Jr. was the editor.

nests – n. the place where a bird lays its eggs and takes care of its young

breeding – n. the process by which young animals, birds, etc. are produced by their parents

unleashed – adj. not having a leash